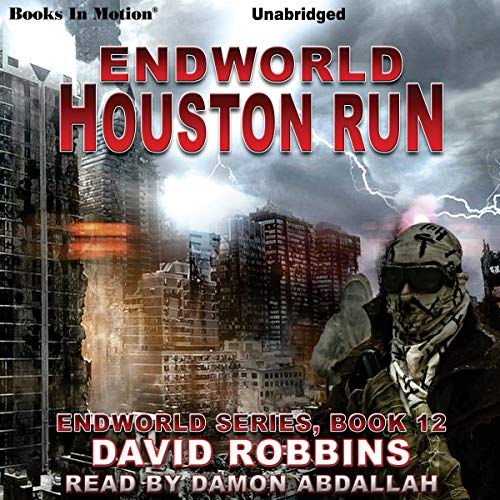 By: David Robbins
Narrated by: Damon Abdallah
Try for £0.00

Ashes to ashes, dust to dust – the world spins on toward final destruction.

One Hundred Years After WWIII - What was left of America was swarming with mutants, killers, and savages bent on plunging the world into eternal darkness.

The Family - Isolated survivors of the holocaust, they were the last, best hope for the future of mankind.

The Alpha Triad - Blade, Hickock, and Geronimo were the fighting arm of the Family - hard men, skilled in staying alive, no matter what the cost.

The Houston Run - Now called Androxia, the city of Houston had been taken over by the Superiors, a race of androids developed by NASA before the war. Masterpieces of perfect evil, they planned to take over the world, forcing all humans to live in slavery. Unless the Alpha Triad could stop them, every man, woman, and child would be doomed to a life of pain and cruelty.

What listeners say about Houston Run

This entry in the series revolves around a mysterious group of technically “superior” enemies who have aligned with an old foe from the past.

It was great to see the the start of lynx, ferret, and gremlin becoming a triad. I love it when the story involves more than alpha triad. Don’t get me wrong, I love alpha, but I like it when others get “screen” time.

Great work working in the old foe! I’m trying not to spoil anything, so my review is a bit vague, but once you read it you will understand.

Great work by the author AND the voice artist. Its great when one voice artist does an entire series. It makes it easier to follow, and consistent. Another outstanding novel.

I continue to enjoy this series. I liked the way things come together. We learned the fate of a different section of the USA since the big blast 100 years ago. The family once again faced with a new threat. And an opportunity to make new allies. The narrator continues to do an excellent job. I look forward to continuing Alfa Triad's adventures. On to the next Run.