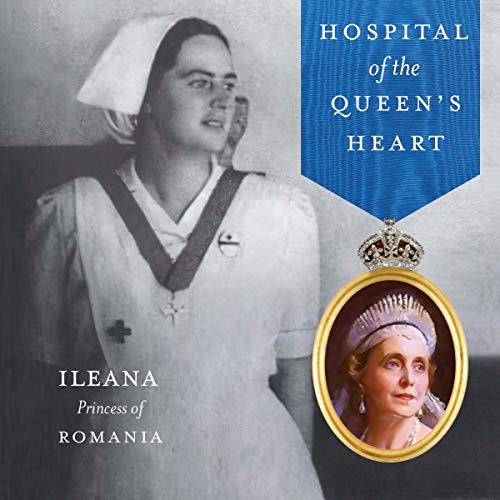 Hospital of the Queen's Heart

By: Ileana Princess of Romania
Narrated by: Kristina Wenger

During World War II, Princess Ileana of Romania (who later became Mother Alexandra of the Orthodox Monastery of the Transfiguration in Pennsylvania) built a hospital in memory of her mother, Queen Marie, at the foot of her castle of Bran, Romania. She called it the Hospital of the Queen's Heart. As both nurse and hospital administrator, Ileana devoted herself to the care of the war-wounded and lovingly served the surrounding population. It was here she witnessed the end of the war and the communist takeover in August 1944. This book tells the gripping story of her sacrificial labors on behalf of the Romanian people in a time of great crisis.

What listeners say about Hospital of the Queen's Heart

This book was truly delightful and inspirational. I had only heard of Mother Alexandra in passing, and this was my first real experience to learn more about her. As a nurse myself, I quickly identified with her love of medicine and her love of actively caring for people. This story, which focused on only a few years of her life, make me want to know more about her. This book is Prince Ileana of Romania’s story of how her hospital, The Hospital of the Queen’s Heart, came into being and grew into a facility that cared not only for soldiers, but also the entire community surrounding her homeland. Princess Ileana (now Mother Alexandra) provides a first-person account of the hospital’s inception, financial support, and growth came to fruition despite all the trials and tribulations of wartime, Russian occupation, and Communist rule. Stories about the hospital’s humble beginnings are interwoven with stories about staff and patients alike. It is peppered with stories of lively marriage celebrations and descriptions of traditional Romanian customs and dress that fill the story with color and joy. Her love the profession of nursing and her satisfaction to care for people in their most vulnerable times is evident throughout the book. Reading this book feels as if you are sitting in a chair next to Mother Alexandra with a cup of tea as she recounts the challenges and triumphs of building a hospital from the ground up. She weaves in and out of the pragmatic history of the hospital itself and the sentimental anecdotes of the people (staff, family, physicians, patients) that she cared for so deeply. Her vision, faith and perseverance are surpassed only by God’s protection and providence. She illustrates God’s providence by relating how she was willing to sell a personal piece of jewelry to purchase a building to start the hospital, an old family friend offered to give her an old army barracks to use for the building. She recounts that even though she was willing to use the money from that piece of jewelry multiple times, God always provided, and she was able to give that jewelry to her daughter after she moved to the United States. For this audiobook, the reader’s performance is exceptional. Her cadence and inflection truly make it feel as if you are listening to a loved one recount the tales of their youth.

I love these stories about this Romanian princess. I highly recommend them all! The narrator is excellent!

This is the third book I've read in the last year by Princess of Ileana of Romania (Mother Alexandra), and each one is it's own gem. She has such a lovely and straightforward writing style which takes you right inside the story she's telling. The narrator for this audiobook was excellent and did a beautiful job with the Romanian words and phrases, which made the story all the more enjoyable. This is the story of Princess Ileana's founding of the Hospital of the Queen's Heart in Bran during the period following WW2. Her stories of the struggles to build the hospital and keep it going in what were extremely difficult circumstances are inspirational--specifically, her reliance on God's provision and her certainty that they would always have what they needed (and they did!). I love her stories of the peasant people she served--some of the most beautiful passages of the book are her descriptions of their humble but life-giving homes. She speaks frankly of the horrors of communism, but also with compassion for those who naively supported it. The most heart-wrenching stories of the book to me were the men who found themselves at the end of their life, broken by communism and looking back on their lives with regret. It is a cautionary tale for our own time. In addition to this book I also highly recommend I Live Again, which is the story of Ileana's exile from Romania. She was a woman of true courage and a heart for God and her people. They are beautiful stories which will inspire you again and again.

I really enjoyed this autobiography. Her writing is witty and entertaining. It also gave me some new insight on what it was like to live through WW2 in that part of the world. As a Christian, I love Princess Ileana’s heart for her people. As a nurse, it’s interesting to hear some of the things she came across, and her struggles as a nurse in the Romanian countryside. I would recommend this book to anyone who is interested in reading about life in Romania during the end of WW2, or simply an inspiring story of the good even just one person can achieve through hard work and the will of God!