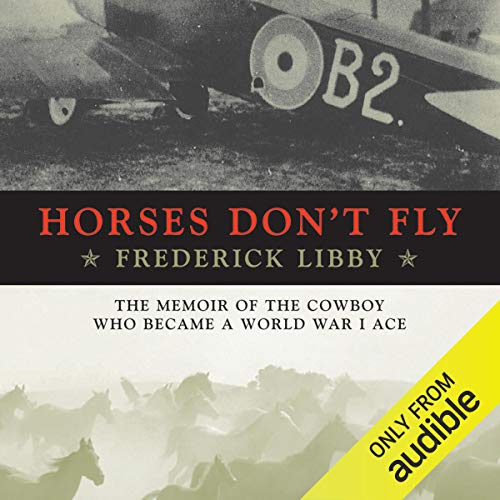 The sparkle and humor that Frederick Libby brought to being a cowboy stays with him through his stint as World War I ace and straight through his later life, as he clearly had a grand time writing these memoirs. Stephen Bowlby’s performance of the audiobook grounds Libby’s laissez faire attitude, keeping it flowing while retaining its everyman feel. Libby presents himself as a wisecracking cowboy but he undoubtedly led a remarkable life and his story provides a unique slice of real American cowboy attitudes and how that rugged individualism transferred for one man to the air battles of WWI.

Growing up on a ranch in Sterling, Colorado, Frederick Libby tamed countless horses, drove cattle, and even roped an antelope. When World War I broke out, he enlisted in the Canadian army with the same happy-go-lucky daring and grit with which he approached all things. In France, he became an aviator with the Royal Flying Corp, downing an enemy plane on his first day of battle over the Somme. He went on to become an ace, with 24 victories to his credit, just two less than Captain Eddie Rickenbacher. This is a rare piece of Americana, told in as pure and compelling a voice from the vernacular heart of this country as you will ever hear.

beautifully written and engaging book, Frederick's story had me hooked from the very start with his up bringing with his dad and brother all the way to the end. The postscript from his granddaughter was lovely and written with real affection.

What did you love best about Horses Don't Fly?

I enjoyed this book when I was first given it by my great aunt. We are distantly related to the author Frederick Libbey so I may not be completely objective. I love the way he narrates the events of his amazing life in a modest and humorous way. His description of the late cowboy era and World War I aviation is amazing. He focuses on particular episodes in his life that he stumbles into more from curiosity and naïveté than planning. I very much like that he gives credit to all that help him and has a very positive outlook even in the midst of very depressing circumstances. I appreciated the book even more when I studied WWI history. The narration is absolutely superb. This is the finest pairing of wonderful story and excellent narration I have encountered.

Have you listened to any of Stephen Bowlby’s other performances before? How does this one compare?

This is a tough question since I enjoyed so much of the book. I really enjoyed the episode where he destroyed his fancy new Sunday suit by roping an antelope.

Thoughtful, not a rah-rah

An enjoyable account of life from American cowboy to ace in the Royal Fighting Corps.

Well told! Truth is so much more interesting than fiction, and in this case that holds true.