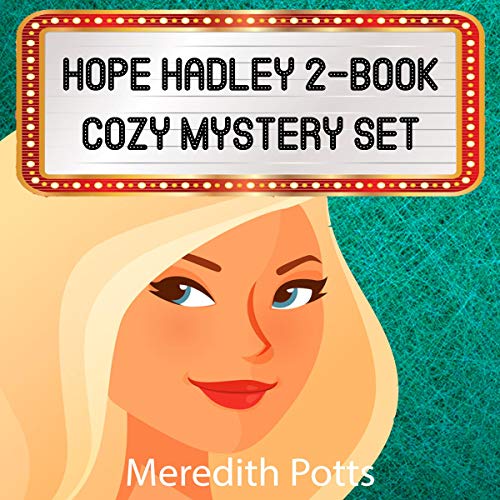 By: Meredith Potts
Narrated by: Stephanie Quinn
Try for £0.00

This audiobook features two books from the Hope Hadley series including: Hurricanes Can Be Murder and Murder Is a Deadly Brew.

Hurricanes Can Be Murder:

When Hope Hadley's Florida hometown is hit by a hurricane, she is devastated. The amateur sleuth's problems don't stop there, though. During the aftermath of the storm, a dead body is discovered.

At first, it appears that the victim drowned during the storm. After an autopsy is conducted, the police realize that foul play was involved. At that point, it is up to Hope and her detective brother to solve the case.

Will they be able to apprehend the killer? Or is there a different type of storm on the horizon?

Murder Is a Deadly Brew:

The city of Hollywood, Florida, is just starting to rebuild in the aftermath of a hurricane, when a new disaster strikes.

A coffee shop owner is found murdered. As always, amateur sleuth Hope Hadley teams up with her detective brother to solve the case.

But the investigation turns into a dangerous brew. As the case heats up, will Hope and her brother get burned? Or will justice prevail?

Once again Meredith Potts has brought us another brilliantly written mystery, this two book combo is superb, cleverly thought out with what I've come to love from Meredith's unique writing style, is the plot with a perfect delivery. There's pleanty of depth with great detailing giving the story a believability quality.
Stephanie Quinn delivers a winning performance, very aptly capturing the characters emotions and bringing out the uniqueness of each one. The story is beautifully brought to life with Stephanie's unique vocal talents.

Hurricanes Can Be Murder and Murder is a Deadly Brew (Hope Hadley), from author Meredith Potts, Well-written & enjoyable. another cute, clean cozy mystery. I was given an Audible copy of this book & am voluntarily reviewing it. I was impressed and enjoyed the vocal variety & inflections of narrator Stephanie Quinn. I look forward to reading more in this series & from this author. (RIP Marley January 20, 2014 - July 24, 2018).

This is one of the two part story. Again,Stephanie Quinn does not disappoint in this complicated murder mystery! The characters come alive and the narration sure helps!I really like how the narration in done in the story,it just to me makes it more exciting! Try it,once you do the audio you will do it more often!

Hope Hadley Cozy Mysteries aren't my favorite from Meredith Potts, but they're still a fun listen, They're great to just sit down, close your eyes, and listen to a good story. They're easy to follow.
I really do not enjoy this narrator. I'm not sure what it is, but she just doesn't do much for me.

Really enjoyed these 2 books and the solving of the mysteries. I enjoy the way everyday emotions in the stories, making the stories more real. Looking forward to reading the next in the series. Fhe narration was good.

Both books are what you come to expect from Meredith Potts..... cute, funny and entertaining.

Hope Hadley 2-Book Cozy Mystery Set was another great book by Meredith Potts. This set consists of; Hurricanes Can Be Murder, and Murder is a Deadly Brew. Both books follow Hope Hadley and her Detective brother looking into murders that happen in their hometown of Hollywood, Florida. I can’t wait to read more by Meredith Potts.

This is a great combination set in a great series!

I love Meredith Potts and Stephanie Quinn is a great narrator as well, she has a fabulous way of lending her voice to each character. This 2 book combination is a great way to continue reading books and listening to them in the Murder is . . . Series and I am enjoying every one of them following the Detective John, his sister Hope who always ends up on the case with him and her new boyfriend now David in the last books. They keep you guessing for the most part as to who the actual guilty party is up to the last few minutes of the narrated book. A great way to sit and sew or do another activity and listen or just enjoy!

This is my fourth audio book by Meredith Potts. At this point I think I can say her books just aren't for me. Stating that someone "threw up their hands" is repetitive in these books. There's really no mystery to the books and no clues to ponder. The dialogue is like something written in a 6th grade short story. The narrator doesn't help the story.

Meredith writes short cozy mysteries and each series includes lots of sinful treats. In the Hope Hadley series, Hope is in love with lemon bars made by her fiance Daniel's restaurant. These stories could be "murder" to your diet! Anyway, I sometimes want a short audible book that can be completed on a drive or a lazy afternoon in one sitting, and Meredith's mysteries hit the spot. Meredith's mysteries always have a female amateur sleuth and Hope is one who helps her brother, a homicide detective in Florida, solve murders. This set includes two mysteries for the price of one! The first, murder happens in the midst of a devastating hurricane in Hollywood, Florida and that further complicates both the investigation and the clean-up work. Hope and her brother have to weed through the suspects until tempers flare and the truth is revealed. In the second story, a murder scene is discovered by fiance Daniel and many suspects emerge so the case becomes complicated. These stories are short, maybe a little too short, but fun and entertaining. I do doubt that a civilian would be given quite so much involvement in murder investigation and infidelity seems to be quite the problem in Hollywood Florida, good still.

A double header and two very different stories with the only thing common, each has a dead body. One was so obviously murder but the second one was at first thought to be an accident. Well what do we do now- we investigate.