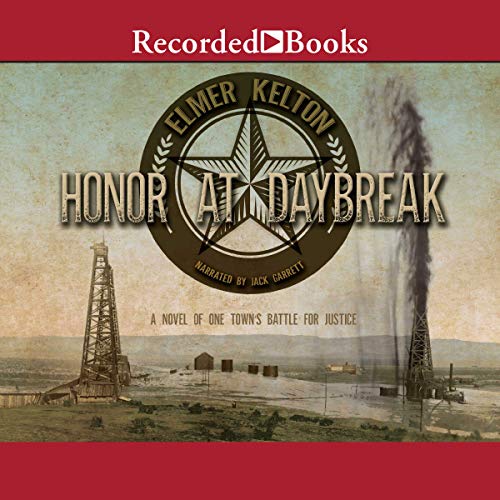 By: Elmer Kelton
Narrated by: Jack Garrett
Try for £0.00

From one of the West's greatest living storytellers, winner of numerous awards, including the Spur, the Golden Saddleman, and the Western Heritage Award, here is Elmer Kelton's magnificent new novel of the wildcat West Texas oil boom of the 1920s.

It used to be that the worst crime in Caprock was moonshining or lying about your Saturday night date on Sunday morning - until someone struck oil. Now the scent of the stuff has brought every dreamer, drifter, and two-bit swindler to town. Among them is the frontier mobster Big Boy Daugherty, who warns any who'd stand in his way: Get out or die. One man will do neither.

Sheriff Dave Buckalew is a man too proud to give up and too stubborn to give in. He liked his town the way it was - before the bootleggers, brothels, and fortune-seeking roustabouts - and so did a lot of other hardworking, decent folk. Together they'll fight to win back their town - and their future. This is the story of their heroic stand.

What listeners say about Honor at Daybreak

This later book was not up to the earlier standards of Elmer Kelton’s earlier true western folklore genre. The plot drug on with so much repetition that I lost interest. Several story lines and conversations became redundant. The redeeming part of the book was description of oil boom and bust of early days of exploration and drilling.

narrator was great. some parts were aggrevating due to what was happening. not a book that should be listened to with little ears.

Texas History Brought back to life .

Once again Texas history is brought back to life through Elmer Kelton’s story telling even though the characters are not real the story most certainly was played out through boom towns across Texas.