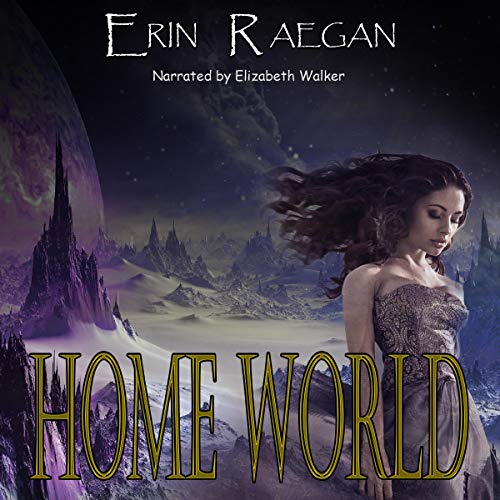 By: Erin Raegan
Narrated by: Elizabeth Walker
Try for £0.00

I fell in love with an alien. Our world was invaded by carnivorous freaks and the Dahk swooped in and saved me and my friends. They want to save the Earth but we are our own worst enemy, or so I thought. The truth is we have no idea what's out there. Now I'm on my way to Home World. The Dahk's world. An alien world. I had no choice, it was taken from me. I tell myself I hate him but I don't. I miss him. But we have bigger problems to face. Problems I'll realize are massively more impactful than just myself and my own little space in the universe. There's no room for my hurt feelings, even though Tahk's not done hurting me.

My mate won't speak to me. I do not blame her for her ire. But I had no choice. I have brought her to my home and I have realized how unprepared she is for my planet and my culture. I could not predict the trials we would face. I have failed her in this. But I will not let her go. She is mine, and nothing and no one will come between us.

The conclusion to Peyton and Tahk's romance lies ahead.

Warning: For listeners 18 years and older. Contains explicit sexual situations, possible triggers, dark themes, and violence. Start of a series featuring these characters and multiple others. Some plot points will remain open throughout the series.

What listeners say about Home World (An Alien War Romance)

I enjoyed these two books and feel that there was a lot of character and relationship building, especially in this second book, as well as a well developed Home World. The world is well done enough that even some details of how a sun-less planet supports life, which seem unlikely, can be ignored and the book still enjoyed. I do, however, wish there was a little more about how the non-ruling class lived in this culture/society. The writing is engaging and has a good pace, the characters are believable, and the conflicts realistic.

My main problem with the story is the ending - it feels like it is missing something, like this couple’s story ends abruptly and slightly too soon. (This ending does set up a starting point for other characters’ stories in future books, but that is not what I mean about the ending missing something; I’m referring specifically to this couple’s ending.) (Without spoiler...) There is a final step in the mating bond ritual that isn’t mentioned in the first book, but it is only mentioned in Tahk’s thoughts one single time! We don’t hear about it at all again the whole book, forgetting all about it, and then it’s happening suddenly - it feels very slapped together and added as a forced ending to the book. Plus, the timing is so abrupt and out of place that it feels random, jarring, and doesn’t make sense why it is happening then and there.

The epilogue is primarily just setting up details for the coming books, with minimal details about the couple’s future. There is a long, wasted section on the stupid chickens! I’d have rather that space have been used to tell me more about Peyton and Tahk than the author chose to include. It also sets up conflict for their future (them vs his society). I’m assuming that will be addressed in the background of future books in this series, but adding it at the very, very end of this book just added to the feeling of incompleteness of their story. There could have been an entire third book about them navigating the eluded-to conflicts together.

Also, I did miss the old guy in this book - he was such a hilarious part of the first book! He’s around, but barely mentioned as anything more than a drunk causing (minor, unimportant) problems on the ship. In the first book, I really liked that the author included his character with the group, not just the cliché damsels in distress. It made the book more believable and well rounded, vs others in this genre. And he brought so much humor in a way that, again, set the book apart from others in the genre. I’m just disappointed he was flattened down to such a two-dimensional character and barely included in this book.

Overall, I have enjoyed these two books and look forward to more from this author and series.

As for the performance... It was better in the first book (even if same voice actor). It was awesome in the first book! This time, she didn’t have enough distraction between Peyton and Tahk’s voices. There was an entire chapter where I kept thinking it was Peyton speaking (her POV) because of the voice used, but the chapter was actually from Tahk’s POV (only clear from context), which was very confusing to listen to.

This is more about the editing: there is an antagonist they meet at the end and his voice is recorded as a reverberating, echoing mess - I couldn’t understand what he was saying. Relistening at a slower speed I was able to figure out the gist of it, but still have barely a clue as to what he was saying. It was very confusing! And right at the climax of the action - that’s just bad audio editing.

Both stories were lack luster and the characters really just got on my nerves. If I could return it I would.

Love the story, but female lead is annoying again.

Here’s to hoping the other main female leads are less stupid and selfish in their reasoning. Peyton was likable and hateful at once. Pretty stupid though in her emotional reasoning for leaving Earth. Read for yourself and make your own choice. It’s not like earth was defenseless. Peyton is just a bit…well you’ll see.

The first book was full of so much energy. It made me laugh, it made me cry. Never did I think it would be so amazing by the cover art, sample and summary. However, I admit a lot of that had to do with the narrator. He gave life into each character he played and made them all so different.

Here, in this book. That appreciation is lost. The narrator barely puts any inflection in her voice, she sounds dull and tired. Nothing like before. I hope that this book can be redone by the original Narrator, Christopher Bousher. He was far better.

This book made me laugh out loud; the interactions and the way the aliens pronounced some of our words was hilarious. The narrator kept repeating sentences; not sure what that was all about. Introducing the dark one into the story was a good way to add additional books to the series. This book needed the first narrator for Tahk and the male characters and Ms Walker for Peyton and female characters; along with getting a handle on repeating sentences would make the narration of this book better. I enjoyed this series so far.