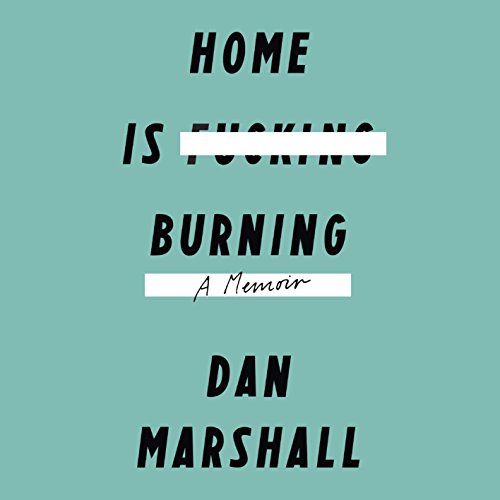 At 25 Dan left his 'spoiled white asshole' life in Los Angeles to look after his dying parents in Salt Lake City, Utah. His mother, who had already been battling cancer on and off for close to 15 years, had taken a turn for the worse. His father, a devoted marathon runner and adored parent, had been diagnosed with motor neurone disease, which was quickly eroding his body.

Dan's four siblings were already home, caring for their parents and resenting Dan for not doing the same.

Home Is Burning tells the story of Dan's year at home in Salt Lake City, as he reunites with his eclectic family - the only non-Mormon family of seven in the entire town - all of them trying their best to be there for the father who had always been there for them.

What listeners say about Home Is Burning

Why I shouldn't listen to Memoirs

What was most disappointing about Dan Marshall’s story?

The lack of emotional depth and engagement.

He seemed to stumble over his own prose and broke sentences in odd places. It almost felt as if he was cringing as he read. Some of the accents bordered on offensive.

What character would you cut from Home Is Burning?

You can't cut from real life, but perhaps the inclusion of the family pets who seemed to get a lot of anger directed towards them, rather than reflecting on that anger.

How do you critique someone telling the world about their family's huge misfortune? Especially when all I seem to hear is good things about the brave telling of the story. I am afraid I disagree. I stuck with the book to the end but I really didn't enjoy it.

I thought Dan Marshall was brave, in some ways, to be so negative throughout the book about so many of the people in his life, However the lack of reflection on any of the events made it hard to engage with the people he was talking about. I struggled throughout the book with the fact that I just couldn't bring myself to care about anyone in the story apart from the father.

I can't believe the level of incompetence that the family seemed to display in caring for their father. Not because I disbelieve it happened, I am sure every family in such a situation struggles and has moments of complete meltdown. In this telling though, the family only seemed to experience one set of reactions and emotions. it is as though Dan chose to only portray one side of his family's experience. Whilst this is fine, because it is his life it makes for a story readers will struggle to connect to.

I can understand why Dan might have choose to write the story the way he did, I cannot however understand why it was decided it was publishable as written.

I am sure the style of story telling will appeal to some, but it left me frustrated. Had I been reading instead of listening I think i would have given up quite early on.