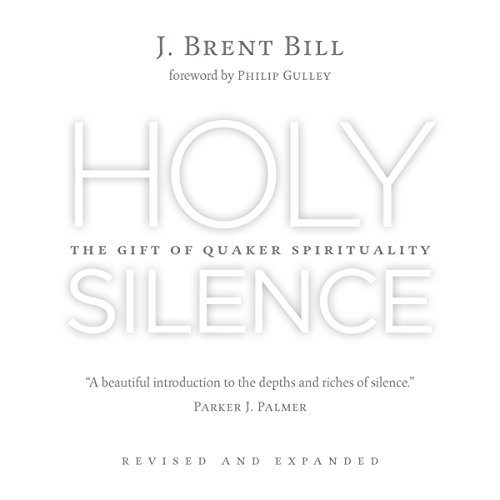 By: J. Brent Bill
Narrated by: Trevor Thompson
Try for £0.00

An invitation to experience more fully the life-changing power of sacred silence. For over a decade, J. Brent Bill's Holy Silence has been regarded as a contemporary classic on sacred silence. With warmth, wisdom, and gentle humor, Bill presents the Quaker practice of silence and expectant listening to a wider Christian audience.

Revised and expanded edition. Includes new spiritual silence practices, new section on incorporating holy silence into worship. Written by one of the most respected interpreters of the Quaker tradition. Introduces a fresh way of connecting with God.

What listeners say about Holy Silence

I really loved this book. I am new to the Quakers and it really helped me understand the spiritual reasons behind the silence!

What did you love best about Holy Silence?

To learn about other religions.

What other book might you compare Holy Silence to and why?

What does Trevor Thompson bring to the story that you wouldn’t experience if you just read the book?

The tranquil philosophy of the Quakers was brought out with his smooth voice.

The content of the book was great. However, as a Quaker, I want at least one full breath, in AND out, between the completion of a quietude query and the start of the next sentence! Starting the next sentence with no pause at all sounds like the reader is ignoring the content of what he is reading.

Where does Holy Silence rank among all the audiobooks you’ve listened to so far?

Wonderful. Powerful message and wonderful narration (although it is strange to listen to a book about silence... think about it!).

The Quietude Queries at the end.

Have you listened to any of Trevor Thompson’s other performances before? How does this one compare?

No. My first one. He does a great job. Such a wonderful bass voice with rich timbre.

I listened over a series of days while driving.

A shout out to Holy Silence!

Holy Silence, The Gift of Quaker Spirituality, by J. Brent Bill (Audible audio book). Published 2005. [I’m required to note that I was given this free review copy audiobook at my request and have voluntarily left this review.] My interest in Holy Science was my attendance at a Quaker meeting over twenty-five years ago, having been invited there by a co-worker (my boss). All I recall about the experience was sitting in a folding chair for about an hour, trying to stay alert and conscious of the activity going on around me. That activity consisted of twenty or so other people also sitting in folding chairs, all of us being silent and lost in our thoughts. At least I was lost: presumably the others knew where they were going. This books explains the concept of non-liturgical worship as practiced by Friends, commonly known as Quakers. Their form of worship is foreign to most of the rest of us, if for no other reason than most of us put much energy into avoiding rather than embracing silence: we wake to music; immediately check our phones when we wake up, often listening to voicemail messages; we fill our mornings talking to family; we pop in ear buds on the way to work; spend our working hours talking with others; listen to music or audiobooks while exercising; and watch television or listen to N.P.R. at night when not watching videos on Facebook or YouTube. In short, we act as if we are afraid of silence beyond a minute or two, or even several seconds. In fact, in meetings, church services, conversations, and informal interactions with others we typically find silence uncomfortable. After a few moments of no one talking we look around to see what’s the problem, and maybe interject something to make sure things are moving along. Silence among the Society of Friends is time for communing with God. It is intentional, and is a form of worship that, arguably, actively engages parishioners more than most others forms of worship. With no one preaching a sermon, no songs to sing, no one reading Bible passages, and no audible prayers, each person is responsible for their own connection with God. During these silent services individuals may talk, sing, read a Bible passage, express an opinion, or otherwise communicate with the group, but each such instance is spontaneous and typically short. And each such break in silence is done if the person feels it’s necessary in the moment. Many meetings are silent from start to finish. As someone who has rejected organized religion, I find this approach refreshing. The Friends’ way is unadorned: shorn of most rituals, costumes, leaders telling us what to think, and other man made rules about how and when to connect with God. This is all explained in the first half of the book, with a focus on the how’s and why’s of silence as used by Friends, including many personal anecdotes and easily understood examples. The second half delves deeply into the overt religious beliefs of Quakers, and is almost a step by step explanation of how to use silence to worship. According to the author, there are many tried and true techniques for maximizing the potential of holy silence, including numerous spiritual questions one can consider. This book is written for fellow believers in the Christian God, but I believe the concept of holy silence is one that can apply to anyone who is searching for a better way to commune with a higher being. At a minimum it’s a peek into a sect of Christianity that few of us know much about.

An introduction to quaker spirituality.

This book explores the "sacramental" nature of silence in the Quaker tradition. J. Brent Bill explores the nature of holy silence, and the Quaker's peculiar dispensation of it, and he commends the practice of deep, expectant communal silence.

Much Needed Advice for our 21st lives

A much needed topic for our busy times. It presented great options and rationale for solitude.
I could not finish the book as I found the presentation of information repetitive. Just my take - I guess I got my take-away from this book early on.

Wow! So Inspiring! Thank you!!!

If you could sum up Holy Silence in three words, what would they be?

What was one of the most memorable moments of Holy Silence?

I enjoyed learning about the Friends, commonly known as Quakers, but above all, this book has inspired me to be still in holy silence before the Lord, learn to listen to His still, small voice, and to be more aware of His presence in my life throughout the day. It’s definitely a book that I will listen over and over! Thank you J. Brent Bill for writing this book!

Trevor Thompson has an amazingly beautiful, deep, masculine voice, wow! However, he needs to sound with more conviction and feeling of what he is saying. There’s also a need for longer pauses here and there. He has lots of potential to become a great narrator. I can’t wait to listen to more books narrated by him and see his improvement! Keep at it, you’re on the right track!

As far as the production is concerned, it needs more consistency of sound.

I received this audio-book free for an honest review by the author, narrator, or publisher. Thank you!!!