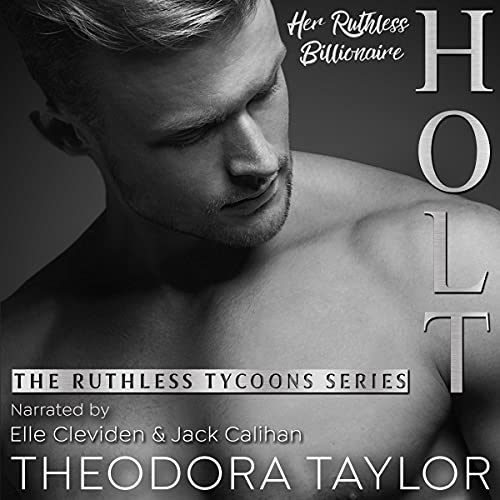 By: Theodora Taylor
Narrated by: Elle Cleviden,Jack Calihan
Try for £0.00

A Second Chance Romance unlike any you've ever listened to before.

I'm happy and thriving in a solid relationship with a good guy - until my billionaire ex, Holt Calson, shows up at the resort where I'm working as a Kids Club manager. I've moved on, but he definitely hasn't.

He's also a single-dad now and in desperate need of a capable nanny to manage his out-of-control son. So the powerful CEO decides that I'm the perfect woman for the job - whether I want it or not.

Listener Note: This is Part 2 of the Ruthless Second Chance Duet, and it completes the epically romantic story of Holt and Sylvie.

What listeners say about Holt, Her Ruthless Billionaire

I wish this book and the most recent books from Theodora Taylor featured stronger female characters. She’s a good writer but I’d like to see more dimensional characters and plot lines.

So glad this was finally released on Audible. What a story! Theodora is a master story teller, manipulating the readers feelings while continuing to keep an intriguing storyline.
I must express just how impressed I was with narrator Elle Cleviden. She really brought out the characters she portrayed. Even her male accent was impeccable.
The only drawback with the nails narrator was his Jamaican accent. It seemed a bit confused at times, resembling an Irish accent, but once you pass that Mr. Cálihan did a great job.
I look forward to more books!

My favorite thing about this audiobook is that I discovered a new favorite narrator. Elle Cleviden did a fantastic job and I hope that she sticks around to narrate the Amber and Luca books if they come out in this format. Jack Calihan's attempt at Sophie's Jamaican accent was hilarious; it took me awhile to settle into it. The story itself is worth 2.5 stars. It introduced me to another couple that would show up in a lot of other books by this author. There are a lot of recycled elements from Theodora Taylor's other books, particularly "Her Russian Billionaire". Honestly, a lot of Taylor's books tend to dip from the same well from time to time. While this book did a good job establishing Holt's co-dependence on Sophie, I found the relationship between Sophie and the drugged out Holt a bit too clean and unrealistic in the first book. I did enjoy the kids and Sophie's handling of Holt's bipolar son in this book.

I read this when this series first came out a few years ago. I am glad there was some updated additions to the story. The narrators were great, they made the story so much more enjoyable. Hopefully when Luca's story comes to Audible they get someone who can get his New Jersey Mafioso's accent down. Nonetheless the twists the people it was so very nice to hear the original Scion story with all the cast of characters. And having already read them all knowing the back stories and hopefully the most highly anticipated story(Luca and Amber).