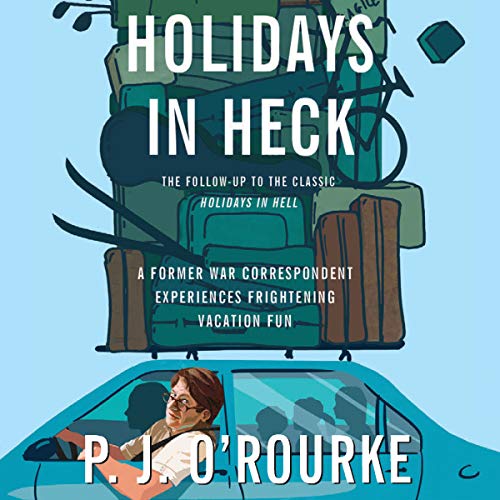 P. J. O’Rourke is one of his generation’s most celebrated political humorists, hailed as “the funniest writer in America” by both Time and The Wall Street Journal. Twenty-three years ago he published the classic travelogue Holidays in Hell, in which he trotted the globe as a “trouble tourist,” a chaos rubberneck, sight-seeing at wars, rebellions, riots, political crises, and other monuments of human folly. After the Iraq War - “too old to keep being scared stiff and too stiff to keep sleeping on the ground” - he retired from what foreign correspondents call “being a s**thole specialist.” But he couldn’t give up traveling to ridiculous places, often with his wife and three young children in tow. Usually he was left wishing he were under artillery fire again.

O’Rourke’s journeys take him to locales both near (and nearly bizarre) and far (and far from normal). Having made a joke that Ski magazine takes seriously, he winds up on a family ski vacation - to Ohio. The highest point of elevation is the six-foot ski instructor his wife thinks is cute. Convinced by an old friend and one too many drinks that “a horse trek is just backpacking on someone else’s back,” he finds himself (barely) in the saddle, crossing the mountains to a part of Kyrgyzstan so remote that the Kyrgyzs have never seen it. He visits Kabul for the food and conversation (excellent lamb chops and a droll after dinner story about the mullah and the cow). He even takes his kids to his erstwhile home away from home, the bar at the Foreign Correspondents Club in Hong Kong.

“‘Would the little ones like something to eat?’ asked the waiter. They serve food at the FCC? Who knew?”

Holidays in Heck shows P. J. O’Rourke in top form - a little older, a little wiser, going to the bathroom a little more often, but just as darkly funny as he was in Holidays in Hell. Here is a hilarious and often moving portrait of life in the fast lane, as he’s always lived it - only this time with the backseat driver that marriage entails and three small hostages to fortune strapped into the booster seats.

“A prolific humorist continues his outpouring of solid writing. . . some very fine travel writing, the best of which is wickedly droll — O'Rourke at his very best. . . . Here's hoping there's another 15 books still to come.” ( Los Angeles Times)
“[O’Rourke is] just as funny but also challenging himself when working outside of topicality. . . . a likable, brisk little brother to my favorite, 1988’s Holidays in Hell. . . . This is my kind of O’Rourke: grouchy, quick and there to make you laugh.” ( San Francisco Chronicle)
“In this cheeky follow-up to Holidays in Hell, former war correspondent O’Rourke trades battle zones for more appealing travel destinations, often with his family in tow. . . . The exotic . . . rub shoulders with the more mundane . . . and all of them share O’Rourke’s razor wit. . . . O’Rourke loses none of his sly humor, finding many opportunities to lampoon American politics under his new guise as a traveling family man.” ( Publishers Weekly)

I loved Holidays in Hell and have remembered several quotes to recite over the years and still laugh at them. O'Rourke has lost his funny edge in this dreary,boring sequel. Don't waste your time and money on this turkey.

If you could sum up Holidays in Heck in three words, what would they be?

While O'Rourke never fails to amuse, there's a lot to learn in this book. I really like the chapter about China. The chapter on cancer treatments is a good read as well.