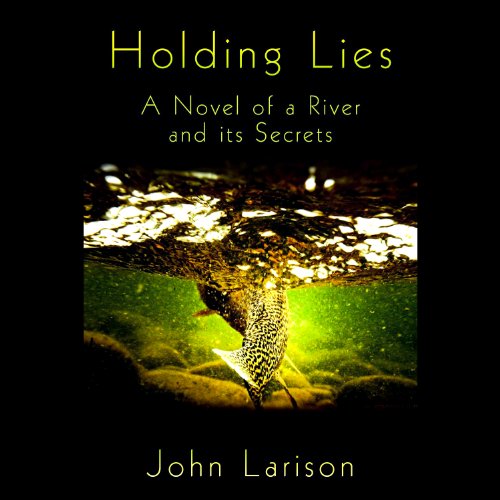 By: John Larison
Narrated by: James Jenner
Try for £0.00

A well-written and insightful look at the complexities of late middle life, with a murder mystery added in for good measure. Performer James Jenner's deep, rich voice skillfully narrates the interwoven tales of a fraught father-daughter relation and a murder investigation that ensnares the main character, a fly fishing guide approaching 60 who has a lot to mull over. The beauty of the Oregon setting stars as a main character here, and those who love the Northwest are sure to feel a twinge of recognition.

A fresh new voice in fiction - one steeped in tradition, stirred by devotion, and struck by tragedy.

With Holding Lies, John Larison takes us deep into a thriving subculture of the Northwest, one born of the ferns and firs, rain and hot-springs, firebombs and whitewater. He takes us even deeper into the troubles of Hank Hazelton, a 59-year-old river guide, as he struggles to reconnect with his only daughter after a 14-year estrangement. His failure as a father haunts him, along with other deep regrets, tragedies, and longings.

In the days before his daughter's arrival, Hank discovers a drift boat stranded below a rapid, empty except for a long smear of blood on its seat. Search and Rescue fails to discover the owner, and within days the sheriff has begun a murder investigation, which, to Hank, appears to be more about old grudges than objective evidence. When Hank himself becomes a suspect, he begins his own search - one that will lead him deep into the violent past of his home valley.

In a novel about fathers and daughters, friends and mentors, sins ancient and repeated, Larison illuminates our commitments to those who've come before and those who'll come after. Holding Lies is a taut, big-hearted novel. It brings to life a tapestry of community sustained by the river, with the steelhead at its core. Steeped in the ecology of place and peopled with unforgettable characters, Larison creates a world we will want to return to again and again.

What listeners say about Holding Lies: A Novel

Truly, lose yourself in the scenery of what I imagine as the Rogue River Valley in W OR. Have good memories of both fishing and ww rafting. Lovely story and wonderful characters.

Story moves slow and without much drama. It’s mostly about fishing. If you love fishing this is for you.