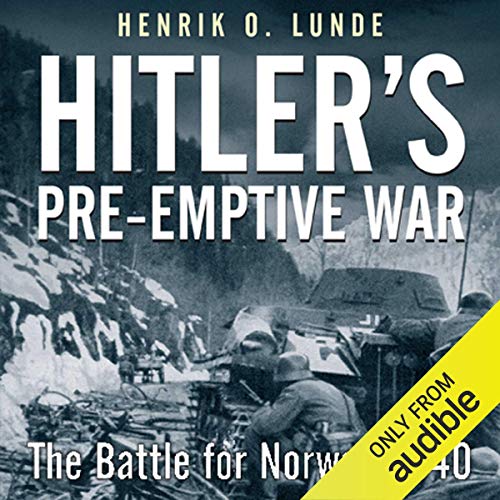 This book describes the often overlooked World War II campaign for Norway - a complex series of battles in which Hitler out-gambled Churchill in order to secure a vital resource lifeline for the Third Reich.

After Hitler conquered Poland and was still fine-tuning his plans against France, the British began to exert control of the coastline of neutral Norway, an action that threatened to cut off Germany’s iron-ore conduit to Sweden and outflank from the start its hegemony on the Continent. The Germans responded with a dizzying series of assaults, using every tool of modern warfare developed in the previous generation. Airlifted infantry, mountain troops and paratroopers were dispatched to the north, seizing Norwegian strongpoints while forestalling larger but more cumbersome Allied units.

The German navy also set sail, taking a brutal beating at the hands of Britannia, while ensuring with its sacrifice that key harbors could be held open for resupply. As dive-bombers soared overhead, small but elite German units traversed forbidding terrain to ambush Allied units trying to forge inland. At Narvik, some 6,000 German troops battled 20,000 French and British, until the Allies were finally forced to withdraw by the great disaster in France, which had then gotten underway.

Henrik Lunde, a native Norwegian and former U.S. Special Operations colonel, has written the most objective account to date of a campaign in which 20th-century military innovation found its first fertile playing field.

The subject is of great interest to some military historians, but the story is lost in the narration! It is heavily critical of certain participants in the short conflict, which due to its proximity of location at its point in the early war years is clearly missed!

The narration is very poor, and it became annoying that pronunciation of names (particularly English) was appalling.

What a shame Such an interesting period of WW2 history ruined by bad pronunciation. All hail Sean Barrett !!!

A true military history of a little known campaign

An incredibly detailed history of this little known campaign which could (should) have led to Hitler’s first defeat of WW2, but in which the allies managed to snatch defeat from the jaws of victory. Full of fascinating details but also perceptive analysis of the military and political shortcomings of all sides.

Great book, but maybe not an audio book

De writer gives us a detailed story about the Norway campaign in april - june 1940. Hé adresses all sides in the conflict, and using a lot of source material. Although I really enjoyed the book, two things made it hard to follow. First you need a number of detailed maps, without them, Google maps helps a bit, but not enough. The narator has a nice clear voice, but he struggles with all non-english namens.

This work on the Battle for Norway in World War Two tries to draw some new conclusions from the actions of all participants. I think it does badly, with some dubious ideas.
Further, the narration is very poor. The reading is full of the most awful mispronunciations and it quickly becomes very irritating.

A nicely presented and detailed account. The narrator is very easy to listen to and does a great job.

Fine history; narration not so good

Would you listen to Hitler's Preemptive War again? Why?

I probably wouldn't listen to "Hitler's Preemptive War" again . . . but, I would read a hard-copy edition.

Tom Parks would be a good narrator for a young adult novel, but lacked the "gravitas" for this material. His pronunciation of words (even English) was odd, idiosyncratic. His word emphasis was off-putting.

Where does Hitler's Preemptive War rank among all the audiobooks you’ve listened to so far?

The subject and quality of the research was excellent.

Not to harp on the narrator but there are times I wanted to stop listening because of his terrible pronunciations.

Excellent history of am interesting campaign

What made the experience of listening to Hitler's Preemptive War the most enjoyable?

Deep research on the subject

Ok, but audible should help reader with German and Norwegian names.

Thorough treatment of the 1940 Norwegian war

This extensively researched and detailed account of the Allies’ and Germany’s Norwegian campaigns is a must read for serious students of WWII. Although the narrative focuses largely on unit dispositions, tactics, and battles, it also provides a general overview of the combatants’ respective strategies and of Sweden’s position between the two sides. One recommendation: more maps. The narrative describes numerous land and sea engagements in different parts of Norway. Seeing those areas on a map or series of maps would greatly enhance understanding of the ebb and flow of the battle for Norway.

A good book full of information but very dry at times and the Audible version would be better when bought with the book to better understand where everything is happening with the maps provided.

Interesting tale of a narrow part of WW2

I found this to be a fairly interesting recounting of history that is generally not well known, although to some it may be a too narrow bit of history. Some of the reflections or opinions expressed in the book might favour the Norwegian point of view, but it appears generally to stay fair to all sides.

Given the frequency of Norwegian and German names in the book, especially in the early parts, it would have been nice if they had found a narrator more familiar with one of, if not both of, the languages; but this became less of a problem after the introductory chapters. Apart from that, I felt that the narrator did a good job.

Only for the serious military historian,

More details about the people involved, rather than just the recitation of unit placement. FOr instance what were the Norwegian civilians faring with all of this ? We arent getting the story from the soldiers, sailors and airmen that were there only a very sterile view from official sources.

Did Tom Parks do a good job differentiating all the characters? How?

Tom Parks delivery not as bad as some others' reviews would have you believe, but it isnt that great either. There are few characters for Tom to differentiate in any case,

Do you think Hitler's Preemptive War needs a follow-up book? Why or why not?

The subject needs a DIFFERENT book.