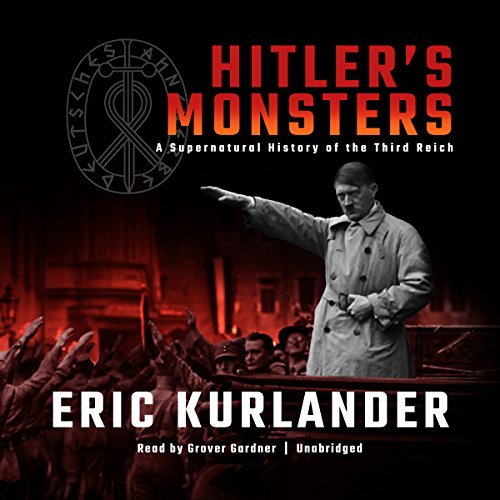 By: Eric Kurlander
Narrated by: Grover Gardner
Try for £0.00

The Nazi fascination with the occult is legendary, yet today it is often dismissed as Himmler's personal obsession or wildly overstated for its novelty. Preposterous though it was, however, supernatural thinking was inextricable from the Nazi project. The regime enlisted astrology and the paranormal, paganism, Indo-Aryan mythology, witchcraft, miracle weapons, and the lost kingdom of Atlantis in reimagining German politics and society and recasting German science and religion. In this eye-opening history, Eric Kurlander reveals how the Third Reich's relationship to the supernatural was far from straightforward. Even as popular occultism and superstition were intermittently rooted out, suppressed, and outlawed, the Nazis drew upon a wide variety of occult practices and esoteric sciences to gain power, shape propaganda and policy, and pursue their dreams of racial utopia and empire.

What listeners say about Hitler’s Monsters

Please ignore the negative reviews, especially about the book being boring - if you are a high-IQ, literate individual with a capacity for sustained concentration and a profound interest in WW2 you will love this book. If, on the other hand, you are looking for an audiobook version of the History Channel's typically salacious nonsense-on-stilts about Hitler, this isn't the book for you.

This book furnishes a surprising number of answers to lingering questions about the more obscure aspects of the Third Reich and Hitler's attempt to reconstruct German society from the base upwards. This including developing a new religion weaved together from the debris of the old Pagan systems and contemporary trends in belief. Although Hitler is viewed as 'evil', Nazism rejects this Judeo-Christian designation and does not recognise its power or relevance to judge his actions or opinions. Hitler's Nazi regime subscribed to a non-scientific interpretation of 'death' and defined in a manner where inflicting it continuously as being appropriate where and when applied to the racial and religious enemies of the Third Reich. Hitler appeared to make bizarre decisions because his value system was entirely different to that already in existence - East or West. The spirit of the racially pure Nazis could express itself at any moment on the physical plane - providing the German Volk were suitably 'purified' through correct racist strategies, rituals and tactics. If the Germans were not racially pure enough - then no spiritual interference would manifest to change Germany's material destiny. Death for Hitler was an empowering act of defiance that ultimately empowered the German race! To Hitler's thinking, if Germany could not meet the spiritual challenge of securing racial dominance in the world - then it does have a right to exist! Mass death for Hitler, was nothing less than a material method for securing spiritually rebirth. He literally 'did not care' about the destruction and the pointless and mindless killing - according to his madness it just had to happen and there was no choice!

There have been so many wild theories put forth over the years about the link between the Occult and the Nazis. Eric Kurlander, an accomplished academic and historian, sets out to explore what exactly the truth about all of this is. In order to do so, he is forced to explain the nature of many different fringe movements and beliefs of the time that impacted the thirty-three percent of the German population that the Nazis reportedly used to ride their way to power. (This is, in fact, a frightening tale that parallels some of the recent political changes in the United States, and thus proves that you only need a unified minority of the populace to gain the power of any nation.) The difficulty with this approach is that the first third of the book is pretty dry and cerebral, but crucial to understanding the basis and full depth of some of the entertaining and intriguing, yet arguably kooky, myths and propaganda that the Nazis used to keep their followers aligned and motivated. Naturally, there are some interesting characters that arise from all of this. Likewise, it depicts a group of Nazi leaders who were constantly having to alter their approach to handling their followers rather than the other way around. This does not make them sympathetic, but makes it pretty clear that those in charge were pursuing power for the sake of power rather than having a more mystical agenda; though there were those in the power structure, including Hitler himself, who turned out to have some rather bizarre interests and beliefs that are not only surprising, but entertaining.

a fascinating account of the Third reich's involvement with the bizarre and the demonic that was both sober and sobering.

If you could sum up Hitler’s Monsters in three words, what would they be?

Who would you have cast as narrator instead of Grover Gardner?

I wish that the production company had chosen *any* reader who is capable of pronouncing German words correctly. Ignorance of foreign languages is a widespread problem in audiobooks. Since I study German literature, I am always pleased to find audiobooks relating to my interests, but I have rarely, if ever, found a reader who actually knows how to pronounce German words in a way that doesn't make me cringe. If the book is about German subject matter, and uses a large number of German words and names, pick a reader who knows at least the basic rules of German pronunciation!

Excellent scholarly treatment of the issues surrounding the supernatural and border science in the Third Reich. I am a professor of German literature, and have done some research on occultism, parapsychology, and related phenomena, so I was eager to read this book, and pleased to find it in audiobook format (despite my dissatisfaction with the reader). Kurlander offers a well-researched account of the topic that draws deeply on primary sources, as well as addressing theoretical and historical work on related topics by other leading scholars. I would love to see more audiobooks of scholarly works like this, as opposed to the popular histories that are more common in audio format.

Nazi Uses of the Occult: Extremes of Twisted Faith

A cornucopia of research and knowledge about the Nazi manipulation of Germans before and during WWII. The use of twisted folk propaganda to justify the oppression and mass murder of ethnic groups in Europe and starting a world war. The book delves deep into occult thinking among Nazi leaders and their use of border science to achieve their ends. A. excellent read and eye opener on Nazi world views. Also a warning to the present and future on how easily humans are bent by masters of deception.

This book provides an interesting view of just how much the occult was not only a part of Nazi Germany, but one of the primary causes of Germans being succeptable to being lured, and then pressed into participating in such horrific events. It should be a warning to every other nation that begins to abandon it's values, and accepts the occult.

I'm very interested in ww2 history I find it quite very interesting, but I've tried numerous times to listen to this and the reader is very mono tone and the book it's self just doesn't hold my attention!

I bought this audiobook after rewatching the Indiana Jones movies. This book is not that. it is very well researched, with a lot of very interesting stuff. However, it is presented in a very boring way. i agree with the other reviews in that it sounds like someone reading a school paper.

A Profound Insight Into a Sadly Relevent Topic

This book presents the origins to much of the western world's modern, ignorant, ideologicla racism, and paranoia over metaphysicl/existential dilemmas concerning race. It's essential to understanding the development of bigoted pseudoscience over the course of generations, and gives a detailed account of how closely linked the spiritual revival was to white supremacy. The best part is this is the first author I have encountered willing to call the Nazi myth out for the fraud that it is. There are no pacts with demons here, or UFO's, but you will find out why some of Germany's worst blunders stem from the ridiculous mystical strategies that doomed the third rich before the war even began. All of the research is thorough, and free of a lot of the new age dramatics one normally finds in books about the occult fascination of the Nazi's.

Written like a term paper by a student wanting to impress

A potentially fascinating subject rendered into a dull intellectual dissertation meandering intolerably on into painful disinterest.

One of the worst books I have ever read

G.O.K...(God Only Knows)...very difficult book to listen to...can't believe there is someone who would enjoy this book.

Has Hitler’s Monsters turned you off from other books in this genre?

No...but I'll be more careful in the future in choosing my books.

Grover Gardner is one of the best...I'm still in awe that he could go from start to finish

Yes...it would make a great starter for a fire in the hearth

As stated in most of my reviews...I walk a great deal...3 to 10 miles a day....the books I buy are in general, history books and books that have a read time of usually +20 hours...If I walk 2 hours a day...that will have me listening to a book for about 10 to 12 days....this book made walking an ordeal...listening to it as you walk made each mile seem like 2....last comment...TERRIBLE...repeat...ONE OF THE WORST BOOKS I HAVE READ.....