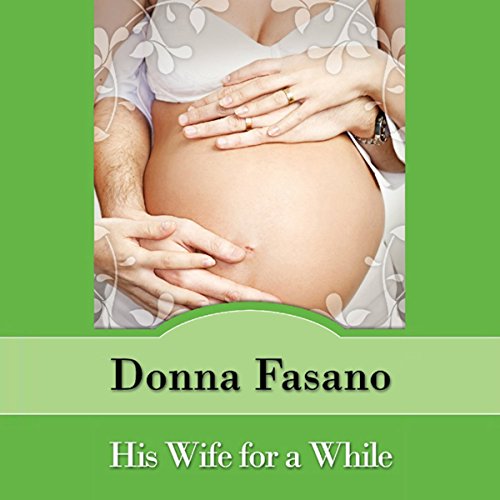 His Wife for a While

His Wife for a While

Ben Danvers was about to lose everything - unless he found a woman willing to become his wife. The terms of his grandfather's will were outrageous, but they were ironclad. Just when Ben was about to give up all hope, the last woman he ever expected to wed made a startling proposal.

Chelsea Carson offered Ben a deal he couldn't refuse. He could keep the family fruit orchard if he would make her one and only dream come true. But there were to be no strings attached, no messy emotions when it was over. Their makeshift marriage would be perfect?unless Chelsea allowed love to bungle the plan.

His Wife for a While was previously published by Harlequin™ and has been updated, edited and expanded by 10,000 words.

Donna Fasano wrote for Harlequin™ for over 20 years, publishing 32 novels that sold over 3.5 million copies worldwide. Her books have won awards and made best-seller lists. She loves to hear from readers; contact information can be found on the title pages of her books.

Donna Fasano is great at creating characters that seem real -- with the mixture of strengths and weaknesses that real people have. Best of all, she's at the top of the game in writing a sweet romance filled with emotion and characters who end up yearning for each other -- like Chelsea and Ben in this story. For comic relief, there's Ben's Aunt May.

Narrator Mary Lynn Bowen is skillful and brings this romance to life. She superb in voicing the different characters, but in Chelsea's voice, she really shines.

HIS WIFE FOR A WHILE has depth. You'll root for Chelsea. She learns, with the help of others, to overcome the tragedy of her own past, and that is what really helps her to embrace her future. She earns her happy ending.

This is a wonderful short and sweet romance

In another thoroughly enjoyable story from the pen of Donna Fasano, this audiobook version of His Wife for A While was the perfect afternoon listen: who can resist a sweet romance when the week gets too long?

Meet Chelsea: bookkeeper at the family orchard owned by Ben. With the recent death of his grandfather, Ben has some unusual conditions that he must meet to finalize the terms of the will, and save the orchard. Chelsea has overheard the discussions about this strange “condition” of the will: Ben must marry to keep his inheritance.

With narration provided with the perfect amount of emotional remove and insecurity while voicing Chelsea, and the hints of utter bewilderment featured in Ben’s interactions with her, Mary Lynn Bowen manages to incorporate the character’s emotions without overwhelming use of inflection or tone; providing an enhancement and not a distraction to the author’s words.

Chelsea is a bit difficult to appreciate, until she allows herself to remember the difficult times, and be vulnerable: her standoffish manner is easily misinterpreted as cold and calculating, not a defensive mechanism. With the addition of the narration, Bowen manages to convey the turmoil that is hidden within Chelsea, her deep insecurities and her inability to believe in herself. Ben is trying very hard to understand and give her the understanding she needs, but even he is often stymied at what to do. His general affable character and honest appreciation of Chelsea, his appreciation of the family and orchard, and even his underlying good humor all come through in his characterization, and make his character even more perfect a fit for Chelsea.

What feels like it could easily translate into a rather calculated means to an end plan concocted by Chelsea is quickly turned upside down, as she learns to trust and grow confident in her own worth; especially when seen through Ben’s eyes. This is a wonderful short and sweet romance that will leave you smiling.

I received an audiobook copy from the author for purpose of honest review. I was not compensated for this review: all conclusions are my own responsibility.

So much potential, but I found that I just couldn't make it through it. It got so boring.

Not a buy or credit.

Narration was actually good though.