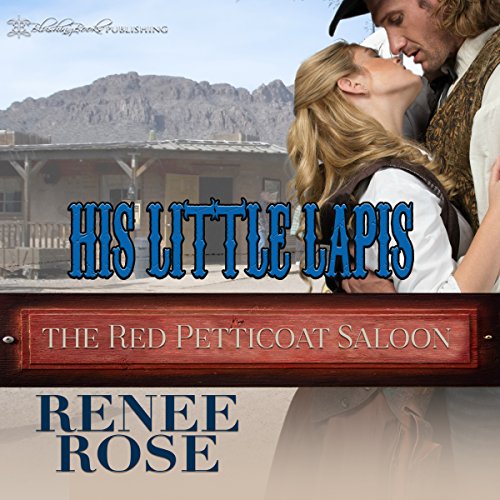 Once a respectable young governess, Louise Small tumbled from society's grace after her employer forced himself on her. She wound up at The Red Petticoat playing Little Lapis Lazuli, a submissive who dresses like a girl and offers her bottom up for frequent spankings.

She enjoys her new identity, so far removed from the prim governess she'd been, but she longs for a real daddy - one who is kind and caring, yet willing to administer real discipline. When she spies Culpepper Cove's Mayor interacting with his young niece, she knows he's just the sort of man she wants. But his disdain for her and her profession put them in conflict.

Letting go of her little self, she reverts to the proper, fine-mannered governess to win his attention. But at what cost? With her little side squashed, and no hope of being accepted in polite society, she hardly knows who to be or what kind of life to lead. Would being the Mayor's wife be enough?

About The Red Petticoat series:

The Red Petticoat Saloon series is a collection of books written by number-one and USA Today best-selling authors. Each book tells the unique story of a different woman, a "gem", who comes to the saloon to find a safe haven and discovers they become part of a family. Recurring characters appear in each book to allow listeners a continuity as they learn about the women who have learned to bend but have not broken under the harshness that life has to offer. It is a series where strong, loving men find not only entertainment at the saloon but the special women who reside under its roof.

What listeners say about His Little Lapis

Not what I thought it was going to be

I love western romance is a and I can even take an intimate seen every now and then, but when you have a grown woman just like a little girl who gets spanked and then goes upstairs to be alone and think about the mayor. That’s just not my style. Maybe when I was younger, but not now. This is why audible should put triggers on their books and warn people they don’t and they never will, because they are though to buy books find out there’s something in it that triggers them and just stopped reading and forgets about the book in Audible keeps the money. I am not one of those people. Shame on you audible you act like you’re a social justice warriors, yet you allow people to buy books blindly and not let them know if they are triggers in their books. Shame on you.

Would you listen to His Little Lapis again? Why?

Not sure if I would, I'm just not into the little girl/daddy thing. But I have to say, some very steamy parts all that aside. But hey, if you're into that kind of stuff I'm certain you will really enjoy this book/audio

If I changed the part that I didn't think much of it would defeat the purpose of the whole story.

Loved the ending, won't get into detail as I wouldn't want to spoil it for others but I found it very sweet. And Meghan did a great job narrating this book.

Yeah it was, it wasn't a book that made you want to say I'll leave it for later.

This audiobook was given to me by the narrator at no cost in exchange for an unbiased review.

I enjoy Renee Rose's writing style and this was a very good story. I felt bad for Louise, after she and Will were married and his brother would not accept her because of her background. He also did not want her near his daughter. Louise was very found of the little girl. She decides to leave Will and when running away, she trips, falls and hits her head. A digusting man kidnaps her because he wants her for himself. Will goes in search of her. This was some nice suspense. Meghan Kelly did a great job with the narration. I received this free copy audiobook at my request and have voluntarily left this review.

Narration great story line not so much

This was really different than what I normal read I wasn’t expecting it to be so much about playing a little girl. I really did not care for the story line I just have a problem with grown men wanting to have relations with a child even if it is a women dressed up like a little child. For the most part if you over look the child issue the story wasn’t bad and was well written. Since I did not care for the story I mostly put my focus on the narrator.

I have listened to one other audio from Ms. Kelly I really wanted to listen to more of her work to see how it compared. I thought her narration in this audio was really good she really puts emotion into the listen. Her voices fit the characters giving power to the males, and soft and sexy to the female as well as her child like voices were just darling. There was no place where the volume was higher or lower than any other place in the audio. If breaks were taken you could not tell. Her voice was very clear you had no trouble knowing who was talking and just what they are feeling. I could really feel the emotions in her voice whether sad, happy or angry. I thought she brought a lot to this audio. I opinion is she makes it worth listening to. I look forward to listening to more from her in the near future.

I understand this is a fantasy story I just had some trouble with this story line. I have a hard time believing anyone would enjoy being a prostitute especially is someone had been sexual assaulted and had to turn to it to make a living having sex with so many men I doubt very much if anyone would have enjoyed it. I also have trouble with women running around outside dressed as she did. Maybe I am wrong but I thought they dress with little more clothes on when going out in this time area.

I did enjoy how she went to help his niece and showed herself as the fine lady she was before prostitution. She was a very strong lady who had no trouble standing up for herself.. I enjoyed the baiting back and toward between her and Will. I still have major issues with any man wanting a woman who looks like a little girl so the sex scenes for me just didn’t work. I also have a problem with prostitution being charming with all the wild carrying on in a mine town. I thought how the author wrote about the town it’s self was realistic with the harshness and violent found there. For me most of this story was a big turn off. I know with an audio there is more to it than just the story you must also review the narrator for me the narrator made this worth listening to.
If you enjoy this kind of read this is a narrator you do not want to miss she really bring the story life in details that you can picture the scenes in your mind. I feel sure there will be people who will not only love the narrator but the story as well. Please do not let my review turn you away from the story this is just my thought and feelings.

Little Lapis works in a brothel dressed as a little girl and likes to be reprimanded and spanked. While at the bank one day she meets Will, the town's new mayor and he becomes the subject of all of her daddy fantasies. Will begins having his own fantasies after seeing Lapis and knows he wants to discipline her often and maybe for the long term but will their conflicting professions halt any future they may want...

Meghan Kelly was great as the narrator. She did a great job giving voices to all of the characters. There were times where some lines seemed far away but that is a small criticism for an otherwise great performance.

**I received this product for free in exchange for an honest and unbiased review.**

This book was not what I expected it to be--a clean read. Sexual inunendoes and acts are told about throughout the book. When I got just a little ways into the book, I shut it off and did and will not continue to listen to it . A BIG dissappointment!!

VERY HOT AND SEXY BOOK. I listened to this one on audio. The narrator was great and the story excellent.

Honesty, I could not even finish this book because the narrations was so annoying. It's a shame bacause I really like this author.

Even that I didn't listen to the end, Meghan Kelly nailed it in her performance. She always does. So if you're into this kind of book, you probably won't regret it.

*This book was gifted to me in exchange for an honest review.