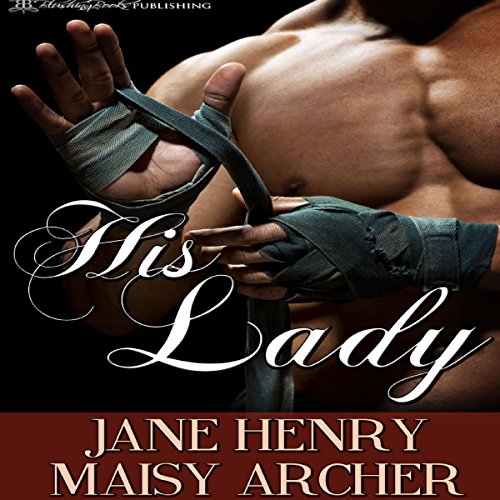 By: Jane Henry,Maisy Archer
Narrated by: Ken Solin
Try for £0.00

Blake Coleman, grieving the loss of his wife and long-term submissive, spent the past year retreating from the world. But he's slowly recognized it's time to reconnect with his friends, and reassert himself as Master Blake, the founder of The Club. It's a full-time job, especially when Alexander Slater's little sister is determined to keep pushing his buttons. He's all too tempted to teach her a lesson, but he refuses to give in to the rampant arousal she awakens in him with her sass. She's far too young and mouthy for the likes of him.

But when Blake and Elena find themselves caught up in a nasty smear campaign motivated by revenge, the two adversaries must form an alliance, and they can no longer deny the magnetic attraction between them. What will happen when the sassy spitfire collides with Boston's most well-known and respected Dominant?

What listeners say about His Lady

Great story and loved the narrator

This book was one good thing right after another. The writing was impeccable. Not a slow or dull part to it. This is a perfect example of writing at the top of its form. The narration was spot on flawless and made for a perfect listening experience.

I asked to receive this Audible book and voluntarily wrote this unbiased review. I love the Boston Dom series. This story deals with so many social issues as well as the BDSM lifestyle. Some of the issues are protecting the privacy of abused women, helping pregnant women getting the care they need, using social media to help protect rights, and being able to choose a lifestyle that you want. Elena is such a vibrant character. When you first meet her in the story you would think that she is a sassy domme but in reality she is a submissive. She longs for Blake but a relationship with him seems impossible. However, never say never. Other factors facing them are their age gap, her brother, and the fact that someone is trying to kill them. The narrator does a good job of storytelling. I just thought he made a few of his male characters have too high of a pitched voices. I highly recommend this Audible book,

I love this series and was shocked to discover that Blake is actually my favorite dom thus far. It was a toss up between him and Slay (who is still a super close second) but Blake I think takes the cake for me.
Enjoyed this one!

This is my first book from Jane Henry and Maisy Archer but it won't be my last. It is the fifth book in this series but I had no trouble reading it without reading the other 4. Blake and Elena are great characters, the book is well paced and has lots of action, tender and funny moments and sexy scenes. What more could I want

The book is wonderful!! I bought it as soon as it was available. I decided I needed to hear it as well!!! Ken Solin is an amazing narrator. I think ingredients on a cereal box would be riveting if he read it!!!

Another installment in the Boston Doms series, Jane Henry and Maisy Archer continue to bring passion and a little suspense. This time we focus on BDSM club owner Blake, who has lost his wife. After mourning her for a long time, he becomes infatuated with Elena, the sister of Alex, a friend and employee. The problem is she is 1/2 his age and knows there will be repercussions if he tries to pursue her. Elena has always had a crush on Blake. The way these two finally came together was incredibly sweet. I somehow think it was a little bit of divine intervention by Josie, though nothing really eludes to this. Elena, though young for her age is extremely mature and very independent. While a submissive, she definitely has fire and is not afraid of a conflict with Blake. Blake, the ultimate alpha, has experience and maturity on his side when dealing with Elena, though there are times even his expertise isn't enough. When dealing with Boston drug Lords and religious demonstrations, this tight knit group of friends will rally and prevail. The epilogue almost makes it sound like this is the end of the series, but thankfully there are several more books we get to enjoy!

The continuity of narration using Ken Solin as the narrator has been wonderful. He has performed he last several of this series and has given stern, alpha voices and at the same time slip into the confident, yet submissive female voices. I like knowing what I will be hearing and am glad that he is able to keep the voices consistent between books. It makes the listen that much more enjoyable.

I absolutely love this series. Jane Henry and Maisy Archer have given us another fascinating couple in Elena and Blake. It was also great fun to see some of the couple's from previous stories. Ken Solin did a great job in enhancing the story with his narration.

A growly dominant meets his match!

Ken Solin narrates His Lady: Boston Doms, Book 5 in a growly, harsh rasp. But that is exactly what this book requires. First of all, it's set in Boston. You can't do a Boston accent gently. It's hard and rough, just like the streets. Secondly, this book is full of profanity. You can't convey the power of a good four-letter word without giving it a hard edge. Plus, he masters the implied threat of painful consequence needed for demonstrating the power of a Dominant. The best narrators give you a window into the book and you can find yourself inside it. I unashamedly admit I felt that stomach dropping, butterfly inducing, oh-my-god thrill when Blake announced his intentions to spank Elena and called her &quot;young lady.&quot; That's the hallmark of losing yourself in a good story: you feel what the characters feel. And boy, did I feel it!
Even the best narrator is only as good as the story and this story is excellent. The book starts with a literal bang. Nitty, gritty, dirty action right at the beginning. As the story of Elena and Blake unfolds, the sex gets hotter because the discipline gets added into the mix. Elena is no quiet, shrinking violet. She is a fierce warrior, fighting for herself and her man even when she shouldn't. Blake is a Dominant whose submissive wife died. Elena is everything Josie wasn't and it takes a while before Blake decides Elena really wants to be his submissive.
There's more to the story than just sex and domination, of course. An actual plot unfolds and it's thrilling to follow the fight to save The Club. There's a lot of social commentary on both the BDSM lifestyle and the perceived prejudice that often follows it. I was quite impressed with the explanations and justifications given for an alternative lifestyle featuring what most consider &quot;kink&quot;. There are also descriptions of women's health clinics and the counseling services they offer. Best of all, there is the recurring message that submissives are not abused victims, but empowered women embracing their own sexual needs.
It's hard to create a book that is equal parts sexy, thought-provoking, kink-friendly, and empowering, but Jane Henry and Maisy Archer make it look easy. I highly recommend His Lady: Boston Doms, Book 5 for the quality of the story and the talent of the narrator.

The narrator was dreadful, sounding rushed. Simply could not listen long enough to even get through the first few chapters!