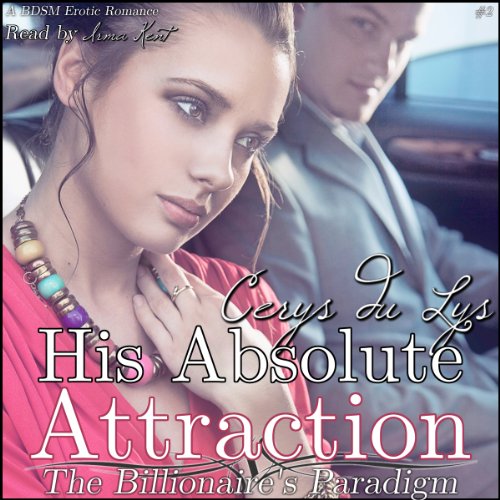 This is the second audiobook in the Billionaire's Paradigm series.

His forbidden desires confirmed, Elise realizes Lucent Storme is not dangerous, yet she finds herself beguiled by him nonetheless, allured by his sordid sophistication…

Hiding, shamed by her abrupt streak of wanton whimsy, Elise knows she can't face Lucent again. Except how will she accomplish that? They're stuck in a library, snow-confined. This fantasy of hers, isolation with an enthralling business magnate, isn't what she anticipated.

Lucent finds her. Of course he does; they're trapped, alone. And he's…worried? He apologizes. Profusely. Is this really Lucent Storme, dominant Director of Public Relations for Landseer Enterprises; singular desires, dark needs?

He's so confusing! Despite her apprehension, she's thrilled by his presence and concern. When he offers her a means to understand him better, she accepts impulsively. Can she entertain his proposal, temporarily submit to his dominant nature? She's already agreed, so she can't back down now…right?

He wants her: to control her, enlighten her. For love, lust, or neither? Enticed, Elise is afraid she's unintentionally falling for him and his absolute attraction.

What listeners say about His Absolute Attraction

If only it weren't broken into tiny parts...

I want to give this story a better review. The writing and narration is good. I like the authors choice of Irma Kent as narrator. The story is enjoyable. But the fact that the book is broken into many fragments is both frustrating and disappointing because the fragments are really small. It's like purchasing several excerpts. Because lets be honest, these fragments are small enough TO BE excerpts and in the end this really jacks up the price you pay to reach the stories conclusion.

I do know that the author does plan on releasing the full unfragmented version in one audiobook and/or kindle file at a later date when it's completed. I look forward to that time so that I can give this story an unbiased review based on the writing, story and narration without worrying about the excessive fragmentation that's currently affecting my opinion.

Would you try another book from Cerys du Lys and/or Irma Kent?

No because no conclusion without buying multiple books

What other book might you compare His Absolute Attraction to and why?

I thought book was to short 1 thur 3 should have been 1 book and Book 4 I had to read and don't have time to read that is why I buy audio books.... I hate when whole series isn't available on Audio, after I start it I sometimes can't finish due to time...

What aspect of Irma Kent’s performance would you have changed?

combine stories 1-3 to make 1 book, you didn't have a choice plus it left you hanging without a end to the story

Did His Absolute Attraction inspire you to do anything?