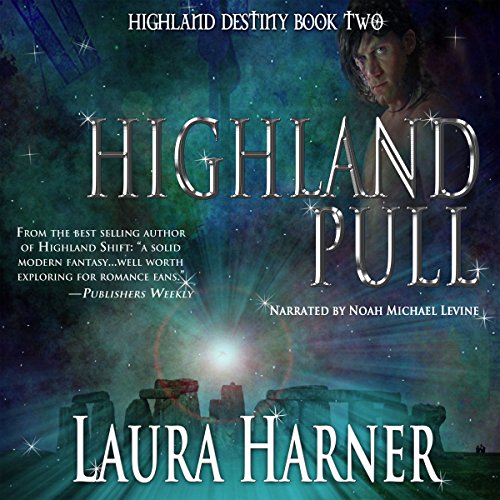 The bestselling Highland Destiny saga continues in Highland Pull, a tale of betrayal, murder, and magick that spans two continents and hundreds of years.

Waking up next to a dead woman was a good indication that Dr. Gabhran MacLachlan was in bigger trouble than he'd realized. Recognizing this as another trap set by the dark Druid Master, Gav races from Edinburgh to New Orleans to find Alysone, a mental patient who claims to have awakened in a reality that isn't hers. Her story, so close to his own, may be the necessary key to unlock his Druid memories and prevent him from shifting realities once again.

When Alysone disappears, Detective Miranda Close is less than thrilled to discover her new landlord and would-be lover is the missing woman's doctor. Raised in the magick of New Orleans and already familiar with the darkness coiled within Gav, Randi's belief in the supernatural may be all that saves her life when they are pulled hundreds of years into his past, and only one of them remembers the truth. When realities shift once again, Randi realizes they may be pawns in a much larger game.

Notes: This is the second book of the Highland Destiny series and includes multiple paranormal elements, including Druidry, Fae, shapeshifting and magick. Heat level: Slowly builds from extreme sexual tension toward "bring-some-ice-water" hot!

I love these characters! Laura had done an outstanding job of intricately weaving these characters together across time. A vivid imagination and much planning brings readers a truly riveting story.

HAD TO FORCE MYSELF TO FINISH

This book was wayyy too complicated for me. Too many characters and some of those characters had nicknames and on and on. Then...they all had different maladies such as shape-shifter, fae, seer, etc. I just couldn't get into it. The narrator was okay. I found his Scottish to sound more like a mixture of Irish and Latin. Not for me...sorry.

I liked the storyline; however, I did not like it as much as book one of the series. The storyline was a bit trying with the coverage of so many characters. In addition, one has to work at keeping up with the storyline and characters while jumping back and forth between past and present.

If you could sum up Highland Pull in three words, what would they be?

What other book might you compare Highland Pull to and why?

any of Moning's Highlander series.

Dr, Gabhran, he love how he is fighting his dark side and hoe Mister Levine got this character pinned

I recommend this book to fans of Miss Moning. Even though the Magic has nothing to do with druids, you will love this series.

I feel like flapjacks with these books. The story is very interesting twist & turns. I wish Ms. Porter could narrate. I wee waring the book travels fast miss something you could miss.!