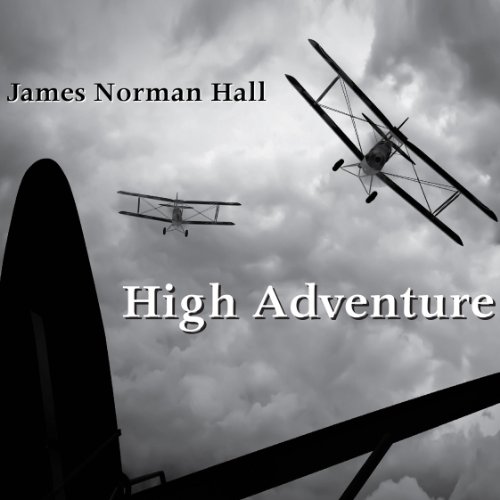 Warfare in the sky for the first time in history! The French Lafayette Espadrille accepts Americans to serve as pilots before America's entry into World War I. James Norman Hall describes his frightening experiences flying over enemy lines and his soul searching when commanded to kill. He recounts his training in a French flight school, his friendships with other trainees and his crash landing in German territory. Years later, Hall wrote, in collaboration with Charles Nordoff, Mutiny on the Bounty and many other successful novels.

What listeners say about High Adventure

I'll start the review by addressing the 2 star rating I gave for performance. Specifically, the narrator sounds inexperienced. He struggled with cadence, inflections, and in differentiating character voices. To top it off, the attempts to read the French lines were painful. All this was exacerbated by poor sound engineering and editing. The choppy starts and stops made edits very noticeable, especially as recording levels were not adjusted between passages recorded in different sessions.

OK, now that I got that out of the way, I can get to the important part, and that is the story. As with most of these stories written immediately after or even, like this one, during the conflict of WWI, you will notice they seem too poetic when judged by todays harsh standards of stark realism. Keeping the period in mind and how authors then were predisposed to paint conflict in a romantic and adventurous manner, one can overlook the prose and focus on the hidden gems contained within the text.

The description of how training was conducted in "penguins", which were aircraft with stubby wing that prohibited flight, is an example of the type of information your average historical account of the war overlooks. If you are interested in expanding your knowledge of WWI aviation, then this work should appeal to you.