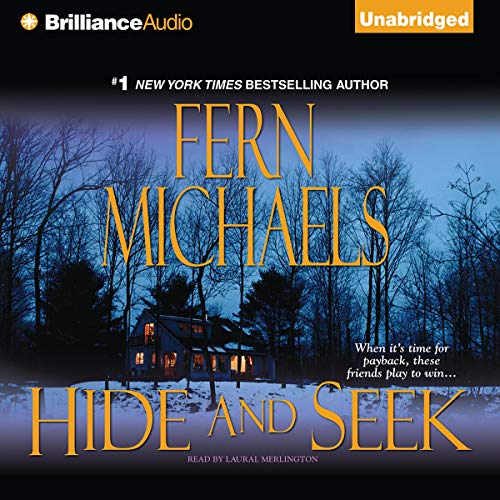 Together, the seven fearless friends known as the Sisterhood have served sweet justice to villains who thought they were above the law. But payback has its price, and the Sisterhood's last assignment almost landed them in jail. Now the women are fugitives with a bounty on their heads, but they're not planning on hiding out for long - not when good friends need the kind of help only they can give.

Mitch Riley, the ruthless assistant director of the FBI, intends to frame Cornelia "Nellie" Easter, the judge who helped the Sisterhood evade prison, and their lawyer, Lizzie Fox, in order to save his own career. He's created a special task force to hunt the Sisters down. Mitch has the entire FBI behind him, but he's about to discover that he's no match for seven formidable women with an unbreakable bond and a wickedly cunning plan to bring the fight right to his door.

What listeners say about Hide and Seek

I love these series of books

I love this series of books, the only thing that would make them better is if there was not so much bad language in them. Other than that, I have really enjoyed them. Be sure to try to listen to them in order!!

Love the Sisterhood Books, but HATE the narration!

I'm working on reading all the Sisterhood books. All this time, I thought Fern Michaels wrote the typical romance/bodice buster books. Finally I was introduced to the Sisterhood and I'm hooked. Love them and want to read all of them. I've read several now...READ, not listened. I’ve listened to this one and have bought more audiobooks that are waiting on me. If I don’t return them....

If I’m going to listen to another one, I have to get past the narrator, Laurel Merlington. She narrates Myra with a shaky, trembly voice of an elderly woman who smoked and drank throughout her life, in spite of the fact that she's about 60 years old. It's like fingernails on a blackboard to me and an insult to people older than 50. Further, she speaks with the kind of Southern accent that we Southerners hate to hear non-Southerners use. For instance "dear" is "deauuuuuhhhhh" and she uses it a lot, exacerbating it with that nasal, strangled, trembly OLD lady voice. May aunt at 104 years old didn't talk like that, nor did my mother, aunts. Charles, her man, who I assume is about the same age, speaks with a British accent and also sounds as if he's going to strangle, as does Jack, the District Attorney. I picture Jack, from his voice, as a wormy little pinched faced man, but Nicky, his honey, describes him as a hunk. However, his voice is nasal and tight and SO annoying! It's not appropriate to the storyline which consists of characters very young to older. I have to hope they don't talk for long. If they do, I fast-forward. Did the author ever listen to her books? I find myself over and over wanting to turn the book off and toss all books narrated by this woman.

It’s irritating when authors don’t listen to their audiobooks and are stuck on making the same mistake over and over..in this case for a series of 29 books. How could anybody want this cast of so many characters to sound so awful?

This narrator narrates all the Sisterhood books so I have to suck it up if I want to listen to them. I don’t know if I can because this woman’s voice is downright distracting.

Can hardly wait to listen to the next book...each one builds on the last!!
The reading performance is excellent! Holds your attention and keeps your adrenalin running!
I have loved every Sisterhood book!

Too confusing with too many plots

I am sure Michaels is a good writer but this novel was a waste of my money. There were too many characters and too many subplots. If one had been chosen and developed, it would have been palatable.

I was caught up from page one and had a hard time putting down at all.

Such an Addicting Series!

Hide and Seek by Fern Michaels, narrated by Laural Merlington is one of my favorites in The Sisterhood series. I've listened to all the books in the series (up to this point), and I just LOVE them! The character development is great, and the storylines are fast-moving. I adore every single character, especially Charles! There are a lot of characters to keep track of, but Laural Merlington's performance as narrator makes it a breeze. I think she does a phenomenal job staying in character, especially during conversations. I'm amazed by her consistency, and I find her to be very entertaining!

I see this Hide and Seek is marked both as Book 8 in The Sisterhood series and Book 1 in Rules of the Game series. Truthfully, I can't really imagine enjoying this audiobook as much, if I hadn't started at the beginning of The Sisterhood series; I would probably be a bit lost. I definitely recommend you start at the beginning with Book 1 of The Sisterhood series, instead of here with the Rules of the Game series. Doing so will give you a deeper appreciation for and understanding of the group, as a whole. You'll learn the who, why, what, and how of the Sisterhood, which will make your overall experience so much more enjoyable. In no time at all you'll make your way back up to this book...I promise! They are addicting!! Happy listening!

Thank you for reading my review. I hope it was helpful. :-)

The Sisterhood takes on it’s first case since fleeing to their Spanish mountain top hideaway. But their mission is back in Washington, D.C. The performance was excellent. But, the story itself in the first part of this book, Hide and Seek, seemed to stumble over itself until a few chapter in, the book just “popped” and became the same action-packed Sisterhood book we’ve always enjoyed! Recommend!

Well wrote. I have read the 7 books before this one. The series keeps your attention. There author is clever because in each book 3 or more people are added to the sisterhood. You just can't wait to see what will happen next. Descriptive, exhilarating, attention holders. 😉.

Good but slow at first.

Took quite a few chapters to get into the book and understand and keep the characters straight. I am looking forward to the next one.