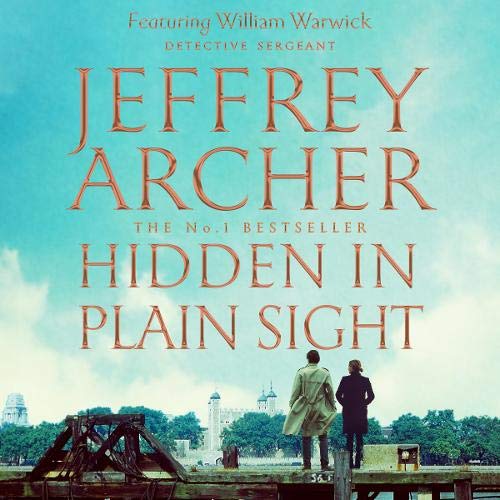 Hidden in Plain Sight is the second brilliant and captivating novel featuring William Warwick by the master storyteller and best-selling author of the Clifton Chronicles, Jeffrey Archer.

Newly promoted, Detective Sergeant William Warwick has been reassigned to the drugs squad. His first case: to investigate a notorious south London drug lord known as the Viper.

But as William and his team close the net around a criminal network unlike any they have ever encountered, he is also faced with an old enemy, Miles Faulkner. It will take all of William’s cunning to devise a means to bring both men to justice; a trap neither will expect, one that is hidden in plain sight....

Filled with Jeffrey Archer’s trademark twists and turns, Hidden in Plain Sight is the gripping next instalment in the life of William Warwick. It follows on from Nothing Ventured, but can be read as a standalone story.

What listeners say about Hidden in Plain Sight

It is a shame when you reach the end of a book as you know it will be along wait until the next one. Hidden in plain sight is excellently written and perfectly narrated and kept my interest right from the first chapter all through to the end. I look forward to the next Warwick instalment with a little too much impatience.

Excellent, all be it with a very annoying ending!

A great follow on to book 1 in the William Warwick novel series. I only hope we don't have to wait months for the next instalment as with so many characters, plots. sub plots remembering all of it will be tough. Seriously advise reading/ listening to the first book in the series otherwise you won't really understand what is going on. This story is very good. Some parts are a little obvious and some parts are drawn out, but all in all it makes for a really great listen. Didn't see that ending happening, hence why I hope we don't have to with long for book 3.

Great story line, and so very well read. I'm looking forward to the next book already.

I almost listened to this book in one session, Jeffrey Archer never fails looking forward to the next book.

Well worth Waiting For

I didn’t realise that this book would follow the first but so glad it did and that the same narrator was used cannot wait for the next. Going to listen to it again. Brilliant.

What a place to leave the story! Thoroughly enjoyable and left me hungry as usual for the next portion! I hope you are not expecting me to wait for a whole year Mr Archer!!

Have fallen in love with William Warwick

The story is a bit predictable, although some little twists. The narrator is excellent at all the different characters. Well done George Blagden

JA never fails to keep the reader/listener enthralled but he does tend to write to a formula so the twists are getting a bit predictable.

just adore JA books i have read everyone,

read every book and this one done.in 3 days via audio. cant wait for the sequel. greater writer JA. it helps so much when having treatment to have something to look forward to each day. hurry on next one please :)

Another great listen from Archer

The style and pace of Jeffrey Archer’s books in the William Warwick series is never fast - giving the reader/listener time to do a bit of guesswork. His criminals seem to manage to twist and turn the story with an ending leaving you hanging for the next book in the series!