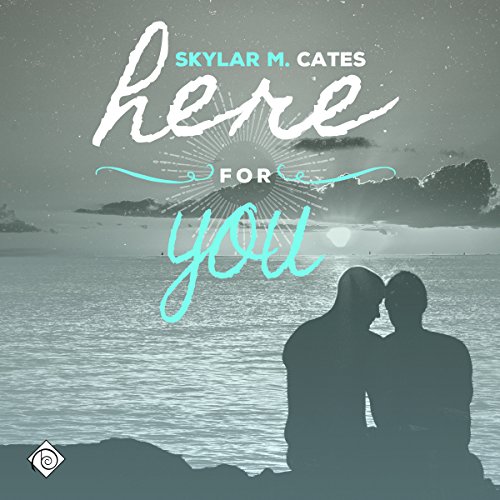 Cole Gannon arrives in the seaside town of Ocean Vista to work as a bartender and finally find a place to belong. Determined to make a home for himself, Cole lives happily with his four colorful roommates, whom he considers brothers. The only problem is Cole's attraction to Ian Stark - a guy all wrong for him. He wishes he didn't keep running into the sexy lawyer.

Ian knows Cole is attracted to him, but the younger man keeps him at arm's length. It only makes Ian more determined to be with Cole and learn all his secrets. But while Ian has built a successful law practice, he hasn't done too well with relationships.

When a sudden and devastating tragedy occurs, it shatters Cole's world and throws Cole and Ian together in unexpected ways. In an instant, everything between them changes forever.

What listeners say about Here for You

Emotional story with a beautiful ending.

Where does Here for You rank among all the audiobooks you’ve listened to so far?

It's up there. I love anything Paul Morey narrates, but this book especially had an amazing storyline as well.

What other book might you compare Here for You to and why?

That is entirely too naughty to post here. I did quite like the family dinners the roomies shared.

If you could take any character from Here for You out to dinner, who would it be and why?

Cole of course. He just seems like he would be so much fun.

Life is a thread connecting us. One pull and it all unravels.

After being basically abandoned by his mother in his youth, Cole Gannon has always longed for a family. Together with his four roommates, he has finally found the family atmosphere and love he always wanted. Then tragedy strikes and threatens the foundation of Cole’s nuclear family. The one person that wants to be a shoulder for Cole to cry on, to lean on, is the one person Cole has spent the last several months pushing away.

Ian Stark has been enamored with Cole since the first day he saw him at a BBQ his intern Brandon invited him to. Brandon is Cole’s best friend and one of the four roommates. He is also slightly smitten with Ian. It’s this conflict of interest and Cole’s devotion to Brandon that stop him from acting on his mutual attraction to Ian. That is, until Brandon is hurt and the only person Cole can think of to find solace with is Ian.

As Cole and Ian grow closer, Cole’s little family drifts further apart. While Cole has always been the glue holding them all together, Brandon was the roots that kept Cole grounded. Without him, Cole is confused, lost and hurting. Cole is torn between two worlds he wants to merge that refuse to blend.

This was a dark and emotional story. There were a lot of tears and anguish, but there was also love, beauty and hope. The little bit of angst that dotted the story was not only necessary, it was well done. Cole is in pain and confused about the rift growing between him and the three remaining roommates. How fucked up is it that life hands you the man you have always wanted, wrapped up in a pretty little bow, but demands such a hefty price in return. Ian is steadfast and loyal though, forever patient with Cole and his mood swings and random outbursts. The story was a series of ups and downs and learning that while life is brutal and demanding, there is beauty in hope and love.

Narrated by Paul Morey and I just loved the voice he gave these characters, he truly brought them to life. Ian is a high power attorney, sort of a no nonsense kind of guy, and Morey captured that with his gruff, no arguments tone of voice. Oh but when Cole was on one of his tangents, Ian became soft spoken and tender and it made him that much more endearing. Cole was sort of flighty and a bit air headed, Morey gave him an easy going lighthearted tone. When push came to shove and Cole got upset though, you could hear the anger and pain in his voice. Fantastic job on telling the story.

If you like slightly angsty but still adult stories with one of those hard fought happy ever afters, then this is the perfect book for you. I can’t wait to start the next book, and I so hope that Mark and Thomas get a story at some point.

Loved this Audiobook! I actually tried reading this story and couldn't get into it..the audiobook totally sold me!!

Such a touching story well told by Paul Morey

Cole’s biological family was never there for him, so he created his own family with a group of friends in a house of their own. It wasn’t always easy but they were there for one another.

Tragedy strikes and Cole loses one of his “family” – Brendan. He takes the loss hard.

Ian was Brendan’s boss, and is older than Cole or his friends. Complicating things is that Cole had a crush on Ian, as did Brendan, before Brendan passed.

Ian, however, has only ever had eyes for Cole.

When Cole turns to Ian for comfort, the couple begins their long dance of courtship. It’s a slow burn, there are a lot of emotional hurdles to be jumped before they can achieve their HEA. But… they do.

This is the first in a series and there are many roommates who undoubtedly will have their story told in the future, they are well developed and each add their own unique flavor to this tale.

Skylar Cates is a phenomenal writer. Her prose is crisp and clear, without a lot of unnecessary clutter. I enjoy her characterizations and she has a real knack for the “slow burn” style of romance. By the time our MCs finally “commit”, the reader is as invested as they are!

I do recommend that you prepare for the long haul, because there is all that sadness to wade through – it’s not a quick, light or fluffy read. For me, I had to be in just the right frame of mind and so it took quite awhile to get through. (And I was listening so that made things more complex – see Audio part of review.)

I also warn that since it is the first in a series be prepared for a lot of background information – there are a lot of guys we need to meet.

That being said, it’s a really well done book about love and loss and friendship and family.

I love Paul Morey. I think he’s one of the better narrators out there, and I always enjoy his reading style. This book definitely challenged him because there are so MANY characters and he has to keep in mind that they are gonna keep showing up. I think he did a valiant job in giving them distinguishing voices, though I did have to go back and forth between book and narration if I stopped for any stretch in time to get re-acquainted again with who is who.

I also didn’t like Tomas’ “voice” it was a bit like a mix between a Hispanic accent and Paul’s Russian accent.

I'm not a fan of this narrator. Maybe a different one would have made it better for me but I think the story was slow. I'm hoping the next two will be better with different narrators.

I did not finish this book, that is not to say the writing is bad, it isn't, it just turned out that it contains some of my 'do not want/can't read' so I will still say go for it, if the blurp sounds good to you