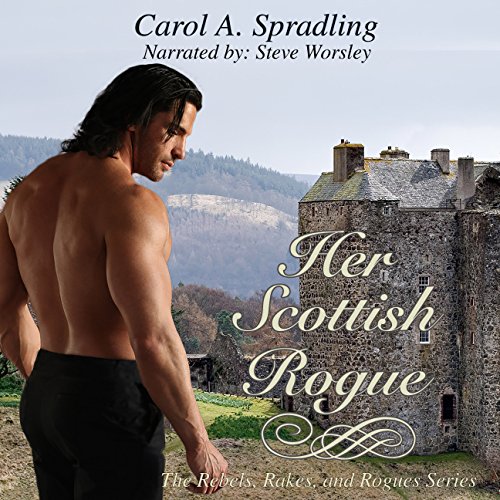 The Rebels, Rakes, and Rogues Series
By: Carol A. Spradling
Narrated by: Steve Worsley
Length: 8 hrs and 7 mins
Categories: Fiction, Sagas
4 out of 5 stars 4.3 (4 ratings)

By: Carol A. Spradling
Narrated by: Steve Worsley

Wren Taggart is no lady. Her life consists of kitchen duties at Newcastle Inn. Mistaken for Lady Anne, the illegitimate daughter of England's Prince Regent, she is kidnapped and forced to marry a man who cares nothing for her or for Britain. Deception and lies is the only way for her to return home. But when her heart softens toward her new husband, she fears she will lose more than the life she's known.

Scottish born, Beckett Montgomery is no lord. The bastard son of a nobleman, he despises everyone and everything British. To restore a family name and fortune he doesn't want, he must convince all of Longton nobility and England's Prince Regent that he is the honorable Sir Lacey and the rightful heir to Longton Castle.

When a murderer targets women who bear a resemblance to Wren, Beck must choose between returning home to Scotland and protecting the woman he's come to love.

I found reasons to do housework so I could listen!

If you could sum up Her Scottish Rogue in three words, what would they be?

If I could sum up in three words, I would say 'Romantic thriller - gripping!

This is the first title by Carol A. Spradling I have either read or listened to and as such I was not sure what to expect. Although I read many genres, I mainly enjoy romance as my escapism and that is what drew me in. As a Scot, I suppose I was going in with a slightly critical ear, hoping that the words spoken by the male and female lead would ring true in light of the strong regional accents chosen by their 'home' locations. I need not have worried! The speech itself was well written by Ms Spradling and came through clearly in the interpretation of Mr Worsley.

My favourite character was undoubtedly Wren, who is swept into a nightmarish scenario within the first few chapters. However, she shows strength and resilience throughout and is a formidable feminine foil to the 'Rogue', Beck Montgomery. The pace of the book is generally very good, with changes in point of view where you would most like them to be. I would say that there were perhaps two occasions where character inner monologue took me slightly too far away from 'the moment' for my taste, but the story immediately enthralled me again once their attention returned to their surroundings.

What does Steve Worsley bring to the story that you wouldn’t experience if you had only read the book?

Mr Worsley successfully injected life into all of the characters for me, regardless of whether they were male or female, and each with their individual lilts in speech. As a female reader it can sometimes be difficult to truly 'hear' the male characters in my own mind - no problems with that here. Mr Worsley's voice is easy to listen to, with an even tone and cadence in narration that is distinctly different from that used when assuming each character role.

The developing romance is moving within the story, of course, but my most moving moment would probably be the conversation that occurred when the brothers sat back opposite one another and could speak freely in private. I'll say no more than that to avoid spoilers.

I enjoyed Mr Worsley's preview of the next book in the series by Ms Spradling, and look forward to finding out what happens with Baron's story.

What made the experience of listening to Her Scottish Rogue the most enjoyable?

The story moved along at a good pace and had enough character development to keep it interesting. The author included just the right amount of intrigue to pique the listener's interest. The story was a good light hearted romance.

What was one of the most memorable moments of Her Scottish Rogue?

The author created a lovely tension in the section of the story where Lady Anne was presented to her father, the prince.

Steve Worsley's voice is full of nuance and colour and it was easy to "see" the story through his narration. His skilled use of accent accentuated and defined each character. I must admit to falling ever so slightly in love with Beck Montgomery!

I really enjoyed both the story and the narration and could quite happily have listened to it in one sitting had time allowed.

The story has left me wanting more and I look forward to reading the next book in the series. Steve Worsley's voice will accompany me through the pages I'm sure.

My dreams in a book - LOVED IT!

I love stories about Scottish people! Braveheart, Taggart and my new favourite, Her Scottish Rogue! The title and the cover told me what to expect, and I was not disappointed! Through listening I was transported back to an exciting, dark and sensual castle in Scotland. A place I did not want to leave. This is a romantic story about Beck and Wren. Back when men were men, and women were owned by men, the story does not relent and keeps up the pace very well.

What was one of the most memorable moments of Her Scottish Rogue?

I can’t say much, as I do not like giving spoilers, but the romance between Beck and Wren is beautiful. I really enjoy the section at 6 hours and 33 minutes.

Which character – as performed by Steve Worsley – was your favourite?

The narrator, Mr Worsley, brought this book to life. He employed accents from the Home Counties, Glaswegian or otherwise lower-class Scots, and different and sustained voices, both male and female, to keep me in the story. Each character was given a unique tone and cadence. I have listened to a lot of audiobooks, so can say that My Worsley is incredible. He has a very pleasant voice. It is perfect. Along with Ms Spradling’s writing, I have never enjoyed bath time so much!

To be fair,'historical romance' is not my cup of tea, yet I found myself riveted to this story. A lot of this is due to Mr Worsley's reading. He employed many and varied accents and voices to great effect, giving depth and individuality to each of the characters, making the listener keen to know about them and to care about them, and allowing the listener to envision the story as it plays out, which is exactly what an audiobook is supposed to do. I listened to the entire story in one sitting, pleasantly surprised to find that I'd enjoyed something way out of my comfort zone. No spoilers, but if you are into historic Scottish Romance then give this a listen. You will not be disappointed.

The beginning of the story was quite intriguing and kept me on my toes but I feel the plot got to a point where the story started to drag. Also, the mistaken identity issue was a pivotal factor in the whole story whoever there were moments that it wasn't handled right. For instance, once the hero figures out the truth he should have at least tried to find out what happened to the real Lady Anne but instead does, what?...

The narrative of the story was pretty slow not to mention there was much "she said," "he said," as opposed to other ways to infer who was doing the talking and at times that became annoying.

What aspect of Steve Worsley’s performance would you have changed?

There were times that the Scottish brogue and English accent sounded the same and flat, like there was no lilt, not always of course but still I couldn't tell who was doing the talking until there was the "he said" part.

Was Her Scottish Rogue worth the listening time?

Yes and no. This is my personal opinion obviously and perhaps I would have felt different if I had read the story myself. The book dragged a lot in some parts so I feel that had I been reading it I could had just skimmed those pages instead of listening to what to me was just redundant and inessential to the plot.

The end was a bit confusing and I get that is a series but it left me with an aftertaste of unfulfillment. To me there were to many untied knots and too many unanswered questions that I don't want to post or I'm afraid I would be giving away too many spoilers.
Overall I guess it was a decent read and I'd like to know what happens to the hero and heroine but I'm still not sure if I'll be picking up the next one in the series.

It was okay. Worth the purchase, but not the best read. I would have liked more background. Maybe book two would be better. I don't want to give a spoiler, but the ending was very unrealistic!

kept me riveted. couldn't stop listening. I recommend this to anyone who likes stories of Scotland