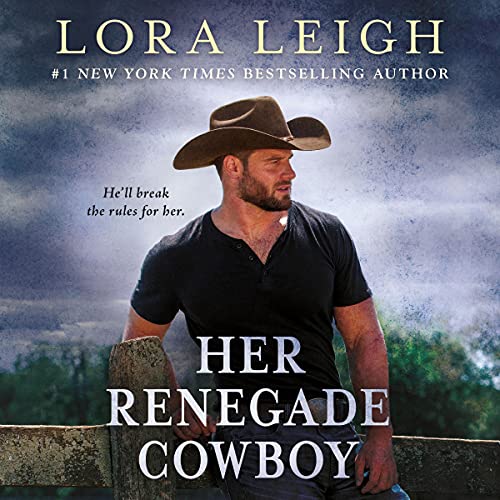 By: Lora Leigh
Narrated by: Lidia Dornet
Try for £0.00

The oh-so-proper school teacher, Lily Donovan has learned, the hard way, that men are not to be trusted. Period. Until Levi Roberts, the new cowboy working at her cousin's ranch, tempts her carefully-built resolve and awakens an all-consuming passion she thought lay dormant. But when she discovers his deadly secret, and her own secrets come to light, Lily unwittingly joins the lethal cat and mouse race between Levi and the man he’s been hunting for weeks.

Former Ranger Levi Roberts has seen his fair share of deadly trouble during his years as a tough-as-nails operative. The ultimate expert in undercover investigations, he’s been tasked to find a man with a dangerous agenda in town. Routine work has been boring...until he runs into Lily, the prickly school teacher who tempts him like no other. Getting under her skin has been deliciously satisfying for his red-hot desire, but when Lily lands in the hands of the very man he’s been investigating, Levi will have to fight with every ounce of his heart and soul to save her - and to heal the heart he broke.

“Leigh’s books can scorch the ink off the page.” (RT Book Reviews)

What listeners say about Her Renegade Cowboy

Loved the law enforcement cowboy angle, couldn’t have a better hero in my book. There was great characters, lots of smokin hot sex, a good mystery. The only things that kept it from a 5 was the cliche way they both wanted to tell their secrets to each other but kept putting it off until someone else told one of them. And dropping a gun in a battle for your life, come on.