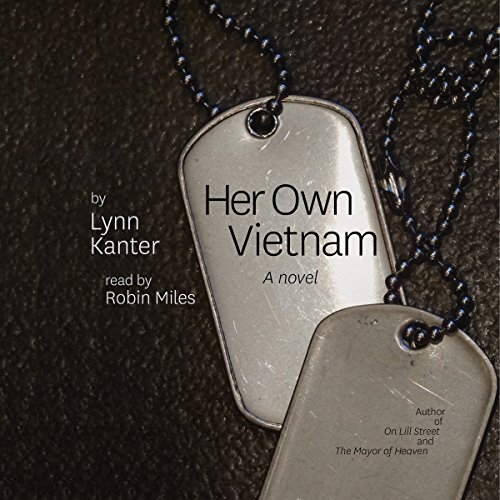 By: Lynn Kanter
Narrated by: Robin Miles
Try for £0.00

For decades, Della Brown has tried to forget her service as a US Army nurse in Vietnam. But when she receives a letter from a fellow combat nurse, once her closest friend, all the memories come flooding back: Della's nightmarish introduction to the Twelfth Evacuation Hospital, where every bed held a patient hideously wounded in ways never mentioned in nursing school. The day she learned how to tell young men they were about to die. The night her chopper pilot boyfriend failed to return from his mission. She must also confront the fissures in her family life, the mystery of her father's disappearance, the things mothers and daughters cannot - maybe should not - know about one another, and the lifelong repercussions of a single mistake. An unflinching depiction of war and its personal costs, Her Own Vietnam, is also a portrait of a woman in midlife - a mother, a nurse, and long ago, a soldier.

What listeners say about Her Own Vietnam

This book was an education, giving those of us who’ve been fortunate enough to not have to deal with this carnage an insight into what it was like, and the life changing effects it had.

A tribute to those women who have served

If you could sum up Her Own Vietnam in three words, what would they be?

What was one of the most memorable moments of Her Own Vietnam?

Understanding that some of the men veterans were actually so hateful to the women veterans. Some things have not changed all that much. Sadly

Love Robin Miles, she envelops you into the story.

The entirety. Those women veterans who paved the way for my generation and on.

Women veterans do need to talk!!!!

What did you love best about Her Own Vietnam?

This book works on so many levels. The characters are believable and drawn with all the contradictions and flaws we humans have. The dynamics between characters--especially the way family members interact--really ring true. It's also a well-written book with some nice turns of phrase and some cool and unexpected metaphors. Plus, before Her Own Vietnam, I'd not really given much thought to the experience of nurses in Vietnam or the fact that they'd have less support back home for dealing with the trauma they'd faced. It's an important story and one that is told really well.

The story did a good job moving back and forth between the present day and the war, and all the plot points made sense without being predictable. The pacing was good, too. I never felt like it was just dragging on and on.

The first two scenes that come to mind might be considered spoilers, so I'll go for the "not as ordered" care package delivered to Della in Vietnam because of the specific responses she and her friends had. I also like how that scene has ripples into the future.

Who was the most memorable character of Her Own Vietnam and why?

We spend most of our time with Della, and I really like seeing how her character transforms in the past and in the present day, so it's probably her. But Charlene is drawn so well that she either ties with Della or is a close second. By the end, it was difficult to remember these weren't living, breathing women.

Not only did Lynn Kanter do a wonderful job writing the novel, but Robin Miles also provided fantastic narration. Each of the characters was so distinct that, in the end, I had to remind myself that there had only been one narrator. I'm really looking forward to reading whatever Kanter writes next!

This book will help anyone hate war. But for those of us who protested the was in Vietnam from the comforts of our homeland it fills a special space of wondering why & who. The author writes so well especially about the inner "dialogue" it's hard to believe that she was not a part of it then! I think all of us and our elected leaders should read it and help all who suffer from the effects of conflict.

What did you love best about Her Own Vietnam?

I loved the way Della's story unfolded, due to the letter from Charlene that brought the two eras to life. The 2000s, where Della is a divorced Oncology nurse with a daughter just post college, and 1969, when Della was about the same age, paying back the U.S army for her nursing education. Or, rather, overpaying, because the relatively short time she spent as an RN in Vietnam took a toll on her that never truly left.

I loved being immersed in this story about women with experiences not much like my own.

I'm terrible at choosing one anything, much preferring "and" to "or", but if I had to pick on performance, I'd have to say "Charlene". She was fully voiced from the moment Della opened her letter.

It's a small thing. The scene where Della and Rosalind share family sayings that their mother is amused they remember. I enjoyed the loving, but sharp-edged familial banter. So much pain and angst occurs in this story that this moment is like a balm.

If you could take any character from Her Own Vietnam out to dinner, who would it be and why?

Della's sister Rosalind's partner Anne, who observes the Brown family dynamics with a sardonic calm that's very appealing to me, in the midst of Della's drama.

The realism of Her Own Vietnam means that this is not a story to be taken lightly, but a journey you won't forget, or regret. Robin Miles has performed the audio versions of a great number of excellent books, and I look forward to experiencing more of her interpretations. And of course, I'll be there for Lynn Kanter's next work as well.