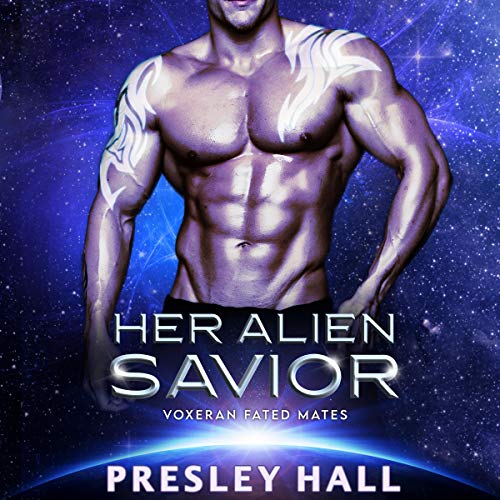 We don’t trust each other. We don’t even like each other. So why does he keep saving my life? I’m not supposed to be here.

Not on this planet. Not in this galaxy. And especially not surrounded by massive alien warriors. The other women all believe we’re safe with them, but I don’t. Maybe it’s because I’ve already seen how awful humans can be, and I have no reason to think aliens will be any different.

At least the one named Jaro seems to agree with me that combining our forces is a bad idea. He looks at me with the same suspicion I have for him.

But as our group makes the dangerous trek to the Voxerans’ encampment, one wrong move separates me from the others - and to my shock, it’s Jaro who comes after me. Now we’re stranded together, forced to rely on each other to survive. If we can’t learn to trust each other, there’s a good chance we’ll die out here.

And if we do learn to trust each other?

Well, maybe we’ll get more than we bargained for....

Her Alien Savior is a full-length, stand-alone sci-fi romance featuring blue-skinned alien warriors, a gutsy heroine, and a gruff, protective hero. If you like sexy aliens, steamy romance, and thrilling adventure, you’ll love this series. No cheating, no cliff-hanger, and a happily ever after guaranteed!

What listeners say about Her Alien Savior

Two troubled souls not wanting to trust strangers some how find friendship but then realize they are their fated mates. One wrong stepped sent Sadie down rapid waters and Jaro who is behind her immediately takes action. The duo separated from the group needs to get back with the rest of the group. On their way back things escalate between them and they find something to help the rest of the Voxeran and human women to escape that terrible planet. Story is so good. but I think the speed of the speech was to slow and made me want to stop this from time to time. But, I do love the story...

can't wait for the next book!!

this was another great book from this author. can't wait for the next one in the series. wish there were more men like this in the universe!!

Best so far and I'm hooked

The character of Ssdie is so weak. There is no depth to her. I thought she at least had a real trauma but it turns out to be her anxiety is from lack of personality not from any real trauma. It's so bad that I had to fast forward most it, when I wasn't sleeping.

Good story, but... the author got lost a little.

This story was good, but I think the author got lost in the middle with a little too much sex. Don't get me wrong I like a good sex scene just as much as the next woman, but almost an hour of it is too much. I eventually had to skip over about 30 mins of the book just to move on with the story. I will buy the next book, but I hope it's not like this one.

I loved this series as well. Presley wrote about the journey of two broken souls and how adversaries and love repaired them. The adventures of Sadie and Jarod were essential for them to discovered their mating bond. They had to discover each other in light of danger and then heal each other before their mating bond was recognized. Very symbolic!