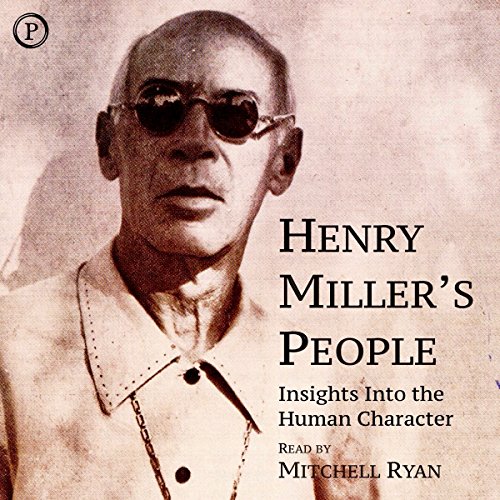 By: Henry Miller
Narrated by: Mitchell Ryan
Try for £0.00

Henry Miller's gifts of profundity, humor, and spiritual sensitivity as well as his joy of living are well displayed in this collection of his insights into the human character. The pieces range from the delightfully raucous to the metaphysically illuminating, and include portraits of the famous and less-than-famous people in Miller's life. All human beings become real to the listener under Miller's penetrating mind and loving eye.

Thank you so much to whoever brought this back into print and made it available on Audible! I first encountered this program twenty years ago, enjoyed it so much I made my own copy, and at some point through the years lost that copy and have always looked for it since then. I actually recently purchased it on cassette tape in order to hear it again, and then this was released so I bought it here as well. Way better to use my phone than an old Walkman.

The program is a collection of essays and excerpts from longer works by Miller describing people he knew or friendships he had, usually with a lot of over-the-top praise. It's the most positive aspects of Miller that are on display here, though it must be said that some of the ways he puts things and some of his attitudes about women and race and nationality are not anything I can endorse. He had prejudices that were complicated by the fact that he also held opposite views simultaneously, in most instances, which develops over the course of longer works, and the complexity of his attitudes are not always evident from these brief excerpts. Still, for a guy born in 1891 he seems positively progressive for his age on these points, and it is mostly Miller the metaphysical seeker and keen observer of human joys and foibles that is on display here.

The reader is basically perfect for the material and it is largely his voice that has continued to draw me back to this particular program over the years. The one small point that I've taken a star off for, is that when French phrases come up, as they routinely do, his pronunciation is way, way, WAY off, enough that I sometimes have to pause the program and repeat the sounds he made in order to figure out what the French he was looking at must have been. It's basically first-year stuff, so I don't really understand why he didn't get guidance on these passages, especially since he reads them so dramatically, his pronunciation makes it almost comical. On the other hand, Miller was fluent in French but notoriously spoke it with a thick Brooklyn accent, so maybe the terrible elocution was purposeful. And of course, if you don't speak French at all, this will not bother you.

Great program overall and thank you again for bringing it back to the world!

Miller at his best, at his exposé & exaltation of the numerous characters that float across his ever wander gaze, agape to the mystery, the joy and suffering of life unbound.