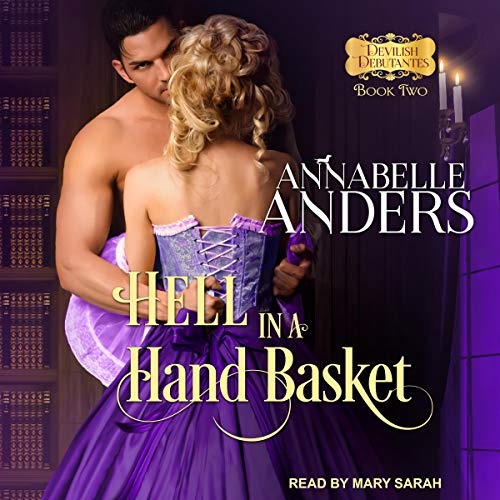 Hell in a Hand Basket

By: Annabelle Anders
Narrated by: Mary Sarah
Try for £0.00

Sophia Babineaux has landed a husband! And a good one at that! Lord Harold, the second son of a duke, is kind, gentle, undemanding. Perhaps a little too undemanding? Because after one chance encounter with skilled rake, Captain Devlin Brooks, it is glaringly obvious that something is missing between Lord Harold and herself...passion...sizzle...well...everything. And marriage is forever! Will her parents allow her to reconsider?

War hero Devlin Brookes is ready to marry and thinks Sophia Babineaux might be the one. One itsy bitsy problem: She's engaged to his cousin, Harold. But Devlin knows his cousin! And damned if Harold hasn't been coerced into this betrothal by the Duke of Prescott, his father.

Devlin, Sophia, and Harold conspire to thwart the duke's wishes but fail to consider a few vital, unintended consequences. Once set in motion, matters quickly spiral out of control! Caught up in tragedy, regret, and deceit, Sophia and Devlin's love becomes tainted. If they cannot cope with their choices, they may never find their way back once embarking on their journey...to Hell in a Hand Basket....

What listeners say about Hell in a Hand Basket

Another Delicious Tale From Annabelle

Along with Hell Hath No Fury this story is all I want in a great, engaging tale. Wiith twists and turns and a novella at the end which I absolutely loved! Love abounds!

2nd book in series Hell in a Hand Basket

I like the story to the 2nd book in series Hell in a Hand Basket. This book also contains a Xmas novella(MUST 👂)!
Has tragic, sweet, everything... H and HH are good characters with good supporting members.

Narrator - a bit breathy in tone.. good job but personally not a fan.

Loved it & the narration

Hell in a hand basket is a wonderful book full of tragedy, love and some happily ever afters. The additional novella Hell hath frozen over is a quick read about the dowager who suffers horrible loss in Hell in a hand basket. It’s great to see her have a happy ending as well.