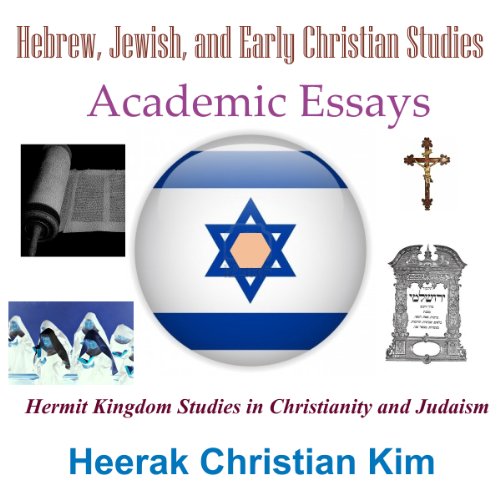 By: Heerak Christian Kim
Narrated by: Jonathan Mumm
Try for £0.00

This audiobook is the first book in the new academic book series, Hermit Kingdom Studies in Christianity and Judaism, which seeks to encourage advancement of knowledge in the area of Hebrew language studies, Jewish historical studies, and Early Christianity/New Testament studies. The academic series particularly encourages the use of interdisciplinary approaches and creative thinking.

Hebrew, Jewish, and Early Christian Studies: Academic Essays by Heerak Christian Kim contains six academic papers. The academic papers represent fruits of academic research conducted in a period of 10 years in three countries in three continents: Israel, United States, and United Kingdom. The research was conducted under the auspices of some of the world most prestigious fellowships, such as the Lady Davis Fellowship and the Raoul Wallenberg Scholarship. Heerak Christian Kim researched with some of the world's greatest minds - at the Hebrew University of Jerusalem, Cambridge University, and America's Ivy League universities. Some of the papers in the collection were delivered before an academic audience in important academic conferences (Society of Biblical Literature, British New Testament Conference, and American Schools of Oriental Research) and represent cutting-edge research in the respective field. The essays show erudition. But more importantly, some of the creative ideas contained in the audiobook represent potentially a strong force of change in methodology and academic consensus in the area of Hebrew, Jewish, and Early Christian studies. This audiobook is aimed at specialists in the field and can be used as a text book for college courses in the area of Hebrew, Jewish, and Early Christian studies. This audiobook would be beneficial and helpful for clergy and informed laity who want a more serious study of the Bible, Christianity, and Judaism.

What listeners say about Hebrew, Jewish, and Early Christian Studies