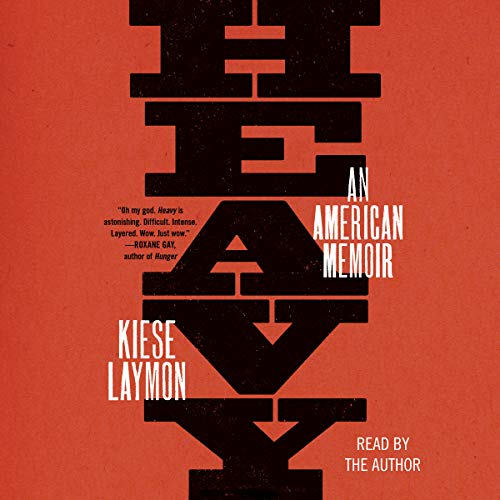 2018 Audible Audiobook of the Year!

Winner of the 2019 Andrew Carnegie Medal for Excellence in Nonfiction!

Winner of the Andrew Carnegie Medal and Kirkus Prize Finalist!

In this powerful and provocative memoir, genre-bending essayist and novelist Kiese Laymon explores what the weight of a lifetime of secrets, lies, and deception does to a Black body, a Black family, and a nation teetering on the brink of moral collapse.

Kiese Laymon is a fearless writer. In his essays, personal stories combine with piercing intellect to reflect both on the state of American society and on his experiences with abuse, which conjure conflicted feelings of shame, joy, confusion, and humiliation. Laymon invites us to consider the consequences of growing up in a nation wholly obsessed with progress yet wholly disinterested in the messy work of reckoning with where we’ve been.

In Heavy, Laymon writes eloquently and honestly about growing up a hard-headed Black son to a complicated and brilliant Black mother in Jackson, Mississippi. From his early experiences of sexual violence to his suspension from college to his trek to New York as a young college professor, Laymon charts his complex relationship with his mother, grandmother, anorexia, obesity, sex, writing, and ultimately gambling. By attempting to name secrets and lies he and his mother spent a lifetime avoiding, Laymon asks himself, his mother, his nation, and us to confront the terrifying possibility that few in this nation actually know how to responsibly love, and even fewer want to live under the weight of actually becoming free.

A personal narrative that illuminates national failures, Heavy is defiant yet vulnerable, an insightful, often comical exploration of weight, identity, art, friendship, and family that begins with a confusing childhood - and continues through 25 years of haunting implosions and long reverberations.

What listeners say about Heavy

This book deals with a lot of different emotions and circumstances that the author faces. An interesting listen that is well presented

I'm a 75 yr old white woman- probably not a target reader for Kiese Laymon. This book reached right down to the bottom of my soul. It's hard to find words to explain why! Just read this book and tell everyone you can to read it. I will never forget this experience. Thank you Kiese

This book was written in a style so unique, so mesmerizing, so enticing.... the authors voice was easy to listen to, easy to believe, easy to empathize with. I loved it for disturbing me do much.

Being a white girl born on the completely opposite end of the Mississippi River, who recently fell in love with a poor (financially) white man born and raised in Jackson, MS I couldn’t put this book down. I was angry at the Mother’s I know from MS, the hatred, the angst, the truth.... angry that the adjustment to loving someone from there is hard for so many reasons I don’t understand, that this book brought a bit more light too. I currently live 40 mins from Bloomington, IN and the parallels in the book made me shiver. Damn.... good job at bringing it all to life and making my head swirl.

I was also sad....I want to find this author, hug him, tell him I live my entire life in numbers on a scale....tell him that my 37 year old body is just now learning to love itself. Tell him that i believe it is possible to love and hate at the same time.... tell him that words are power and also poison.... tell him that he is a gift! Maybe, not tell him anything just look at him and smile, a genuine, caring, compassionate smile that will sink into him that not all white people are bad.... tell him that I hate the hatred too. Tell him thank you.

this book..... it was gut wrenching, difficult to listen too, frustrating, infuriating, insightful, dynamic.

I love it, but not sure if I like it yet, but DAMN, it moved me.

I was feeling angry and miss understood until I realized, it was not a judgement on me, it was not mine at all. This book is so striking and honest that my emotions, and opinions flip flopped at every connection to the humanity. This author has inspired so much. Thank you

This will be a classic!

I listened to the audible version read by the author. I found it to be beautiful and profound. It was like listening to a beautiful long poem. It was honest, painful, and intimate. I heard so much that I could feel in my bones, about addiction, loss, abuse, survival, recovery, and redemption. It called to mind my relationships, with myself, my family, my friends. It speaks of responsibility and insight. It especially speaks to White America and the damage we have doled and continue to inflict.I will listen again as I think there may be much I've missed and I really enjoyed the ride. This is a book that paid out from beginning to end. I'm sorry it ended. I still have so much to learn.

The best works are those that are relentlessly vulnerable and more vulnerable still, vulnerable to the point of raw, unadulterated hurt. Baldwin said if the writer is not willing to be honest about the ugly, the writer shouldn’t bother to write. Laymon is willing to go into that place inside and excavate and reveal and in doing so reveal us all. Loving in account but also unflinching in its gaze of the ugly, Laymon’s catharsis here makes me hope and pray that from all this there is a healing. The American in me conditioned to desire against what I know a happy ending cannot help but want it for him, his mother, our nation and me.

This memoir is accurately named because it deals with all the heavy topics: sex, weight, race, gambling, abuse, anorexia . It is incredibly well written, thought provoking and can even leave you feeling uncomfortable. The author, Kiese Laymon, provides an intimate glimpse into his life in the form of a brutally honest letter written to his mother. If you want to read/listen to a book that is change of pace from all others, this is the one.

Must read for ALL in schools

I’m very excited about this book. I am a white woman married to a black man. His struggle in his childhood is something I’m learning more and more about as we continue to be married well into 30 years. And this story adds to that struggle. I want every white yellow brown child to read this book. To hear these words. Bless you Kiese for having the courage to write this book. Please know that there’s those of us out there that understand the struggle even though we’re not the same color. And it makes me weep. Again everyone needs to read this book…

Wow! This book bowled me over

Heavy is like nothing I've read before. It is an emotional letter written to a dysfunctional mother by a dysfunctional son. It is a story of lives that I, as a white Canadian man cannot relate to. I may intellectually say that "I understand", but I do not. This is an honest look at racism and addiction that is beyond my reality, but which does not negate the need for discussion, dissection and reckoning.

No one could have narrated this book with the impact and feeling of the author. It totally grabbed me and did not let me go until I listened to the whole story in one sitting. Wow!

Book of the Year?

When I saw this as the Audible Book of the Year, I bit. Generally speaking, I enjoy a good memoir, and also enjoy listening to others who grew up in a much different environment than myself. As such, "Heavy" hit a lot of marks of something I would enjoy.

All in all, I was amazed at Kiese's upbringing, the challenges he experienced, and even cringed at the power-play elements at work in such a low-income culture. The expectations placed on Kiese by his mother and grandmother were so vastly different than the family culture in which I was raised. As such, it was an excellent reminder that my life experiences may not be normal for everybody, which provides me opportunities to practice listening, understanding, reflecting, and empathizing in new ways.

But I felt a little lost towards the end of the book. I really felt like I was going to finish and have a clear, "The one thing this book communicated was..." moment, but that moment never came for me. Perhaps that's more a reflection on myself than the book. And admittedly, I'm planning to listen to it again in order to take in his story and reflect on his life experiences a bit more. And I'm hopeful to have a clearer picture of his story, and the one thing he most wanted to share through this memoir.

All in all, it's a good memoir, and one that deserves some of the publicity it's received. But it isn't a "Book of the Year" for me.

Laymon's powerful work drew me in from the very first sentence. I could not stop listening and weeping and being overwhelmed in the best way possible. About to start listening again. Thank you sharing all this vulnerability, honesty, tenderness, and black abundance.