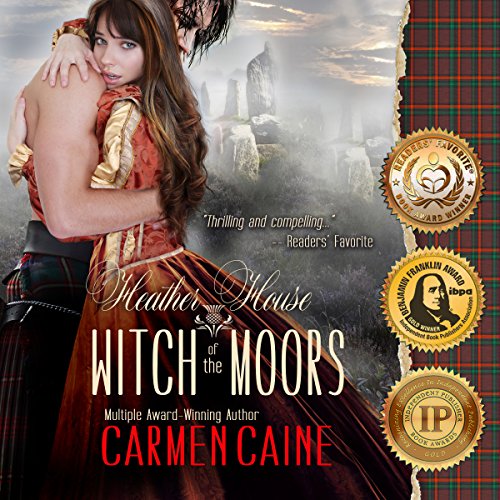 Scotland, 1589 - As the spare for the heir, Alec Montgomery devoted his time to the pursuit of pleasure.

Lighthearted and fiercely loyal, Alec spent his days as his brother's right-hand man while avidly thwarting the matchmaking attempts of the king and his mother's desire that he join the priesthood. But on one stormy night, a mysterious crone and a chance meeting on the moors bring his fate full circle.

To escape a Montgomery raid as a wee lass, Sorcha Cunningham and her mother fled into the forest and stumbled upon the refuge of Heather House with its ancient stone circle. The dreams came to Sorcha that night, dreams that would portend the horrors of her future, forcing her to face a destiny written in the stars.

As the age-old feud between the Montgomery and Cunningham clans ignite, Alec and Sorcha walk a precipice of desire and danger as King James VI of Scotland ushers in the age of witch-hunting and the North Berwick Witch Trials threaten to rip them apart.

What listeners say about Heather House

What disappointed you about Heather House?

why is the narrator American and not Scottish the series is set in the highlands this makes no sense!!!!

i loved this book

it was good all the way through

What other book might you compare Heather House to, and why?

this is a book I could read over again well written

very well read all the way through

it was all good

I loved all three books in heather house series

Would you try another book from Carmen Caine and/or Katrina Holmes?

The computer player on the website is not playing except partial words and VERY fast. I will return this book.

A lot of background/static noise and there are errors in reading, i wouldn't recommend for the price.