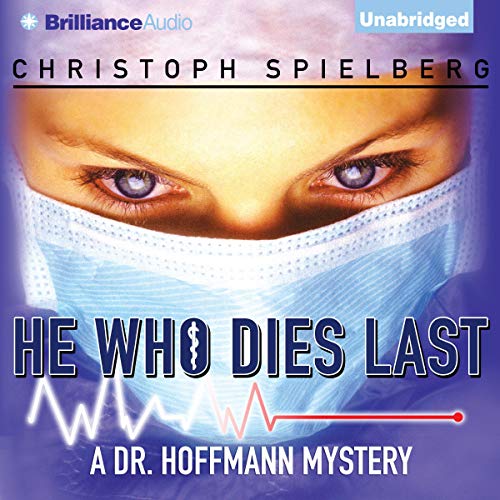 He Who Dies Last

By: Christoph Spielberg
Narrated by: Michael Page
Try for £0.00

Doctor Felix Hoffmann is furious when an infusion pump mysteriously fails, nearly killing his 82-year-old patient. But his anger quickly turns to suspicion when he learns the patient’s posh apartment is for sale - without the patient’s knowledge.

Together with his vivacious girlfriend, Celine, Felix discovers that someone at the hospital has concocted a deadly scheme to fleece geriatric patients and then hasten their deaths. Turns out he didn’t save his patient from an equipment failure - he saved him from murder.

When a suspicious accident turns the daring doctor into a patient at his own hospital, Felix must fight for his life while tracking down the killer. Can he unravel the scheme before the killer makes his rounds?

What listeners say about He Who Dies Last

A low-key mystery set in Berlin -- and a great listen by any standard. There's murder afoot here -- but Dr, Felix Hoffman works with geriatric patients, and some of the normal end-of-life situations he encounters might be natural, others clearly not so. But this is not a "thriller", rather a really interesting look into the world of seriously ill old people and one doctor who serves them.

And their pets. The following is not really a "spoiler", but... "Trixie", described as an 'ugly mutt' was owned by Dr. Hoffman's elderly aunt, so when the aunt herself dies, Trixie is adopted by Dr. Hoffman and figures prominently in the tale. What's interesting -- as a side note in the story -- is that Dr, Hoffman recognizes the important part that pets play in the lives of the elderly, and so he uses a legacy to create an adjunct to their hospital, a kennel for patient's pets, where the patients can go to visit any time they're able -- they even installed a few hospital beds, so a patient can even spend the night with their pet if they wish. Not surprisingly for us pet lovers, but Dr. Hoffman notes that after this facility is established, the demand for pain medication and anti-depressants in his ward drops by half. I believe that -- and an interesting idea. I wonder if this really exists in Germany.

All in all, this a really good book. I'd never heard of the book or the author before -- thank you Daily Deal! -- but now I'll definitely seek out more "Dr. Hoffman" books on Audible. Very enjoyable -- I was sad to finish it.

He Who Dies Last:: Dr Hoffmann -Fan for life

This was my first experience with Dr Hoffmann series and it definitely made me a fan. It was filled with surprising twists and turns. I found it very refreshing to have characters that faced ordinary issues while in the mist of challenging circumstances. I look forward to listening to more of Christoph Spielberg works. Michael Page did an outstanding job, it is a pleasure to listen to him.