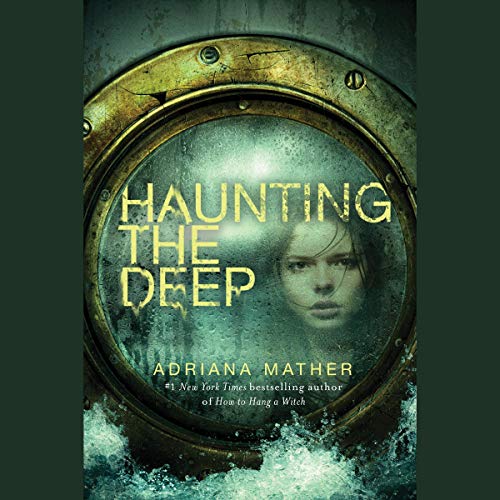 By: Adriana Mather
Narrated by: Tara Sands
Try for £0.00

The Titanic meets the delicious horror of Ransom Riggs and the sass of Mean Girls in this follow-up to the number one New York Times best seller How to Hang a Witch, in which a contemporary teen finds herself a passenger on the famous "ship of dreams" - a story made all the more fascinating because the author's own relatives survived the doomed voyage.

Samantha Mather knew her family's connection to the infamous Salem Witch Trials might pose obstacles to an active social life. But having survived one curse, she never thought she'd find herself at the center of a new one.

This time, Sam is having recurring dreams about the Titanic...where she's been walking the deck with first-class passengers, like her aunt and uncle. Meanwhile, in Sam's waking life, strange missives from the Titanic have been finding their way to her, along with haunting visions of people who went down with the ship.

Ultimately, Sam and the Descendants, along with some help from heartthrob Elijah, must unravel who is behind the spell that is drawing her ever further into the dream ship...and closer to sharing the same grim fate as its ghostly passengers.

What listeners say about Haunting the Deep

I really liked the first book and the second one is well done. The narrator did a good job but I don’t like when they switch narrators between series. That was the main thing I didn’t like. The mystery was great!

Like the first story the concept is intriguing but I struggled to finish it. Really not worth using a credit.

Where does Haunting the Deep rank among all the audiobooks you’ve listened to so far?

I absolutely loved this book, along with her first one. I hope to see another in this series soon or any other future writing from Mather.

I love this story of samantha mathers and her friends I would love to have more about her life and Elijah.

I’m going to read it instead…

I listened to the first book in the series and wanted to listen to this one to see where the story goes. However, this book has a different narrator and she is awful. Her voice is REALLY grating, even when she isn’t trying to be. So, the characters meant to be annoying are unbearable. I managed the first four chapters, thinking I would grow used to her tones and inflections, but I’m not. I will enjoy this so much better if I just read it myself. I cannot over emphasize how terrible the narration is. Save yourself and read it- don’t listen.

Righting the wrongs from the past

Slow at first, but it picks up very well. Good mixture of history, love, and drama I think it's very enjoyable.

loved it wish they where movies too hey Amazon hint? make it one seriously winner

I really enjoyed "how to hang a witch" so when I heard there was a sequel I had to read it. I will say it was a bit predictable at points but still an entertaining adventure rooted in actual history (with some liberties taken of course). i really enjoyed this book start to finish. My only complaint is I wish it was a bit longer so that some characters could have had more time to shine.

Wish the author had read this one too

I loved the first book about Salem. This one read more like a Nancy Drew mystery. It was really difficult to feel the characters as well as I did with the first book. Wish the author had read it.

Interesting storyline and good plot twists. Unfortunately, the narrator completely overacts 1st half of it.