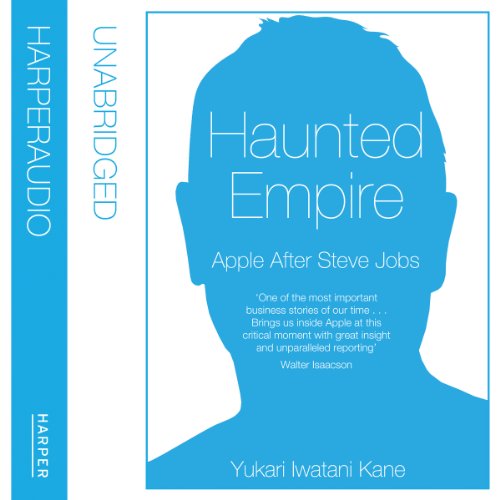 Steve Jobs's death raised one of the most pressing questions in the tech and business worlds: Could Apple stay great without its iconic leader? Many inside the company were eager to prove that Apple could be just as innovative as it had been under Jobs. Others were painfully aware of the immense challenge ahead. As its business has become more complex and global, Apple has come under intense scrutiny, much of it critical. Maintaining market leadership has become crucial as it tries to conquer new frontiers and satisfy the public's insatiable appetite for ‘insanely great' products.

Based on over 200 interviews with current and former executives, business partners, Apple watchers and others, Haunted Empire is an illuminating portrait of Apple today that offers clues to its future. With nuanced insights and colourful details that only a seasoned journalist could glean, Kane goes beyond the myths and headlines.

She explores Tim Cook's leadership and its impact on Jobs's loyal lieutenants, new product development, and Apple's relationships with Wall Street, the government, tech rivals, suppliers, the media, and consumers. Hard-hitting yet fair, Haunted Empire reveals the perils and opportunities an iconic company faces when it loses its visionary leader.

"One of the most important business stories of our time. Kane brings us inside apple at this critical moment with great insight and unparalleled reporting" (Walter Isaacson, author of ' Steve Jobs: The Exclusive Biography)
"The globe-bestriding computer-maker loses its soul in this lively business history. Former Wall Street Journal technology reporter Kane follows Apple after the 2011 death of founder Steve Jobs as the company's knack for conjuring breakthrough i-gadgets lapsed into a series of ho-hum upgrades, misfires like the befuddled artificial intelligence app Siri, and interminable patent lawsuits, while market share, profits, and stock price eroded. Kane makes the story a study in CEO leadership styles, contrasting Jobs's visionary bluster with his successor Tim Cook's icy bean-counting and the histrionics of Samsung's 'wise emperor' Lee Kun-hee.… Kane unearths plenty of colourful material here, including lawyerly jousting, hilariously lame new-product unveilings, and conference-room psychodramas between bullying execs and grovelling underling... This well-paced, vividly detailed narrative reveals the machine surrounding the Jobsian ghost at Apple and brings the company's high-flying mythology down to earth" ( Publishers Weekly)

What disappointed you about Haunted Empire?

There was lots that was ripped off from other books in my opinion and some of the arguments used in this book are just idiotic!

What was most disappointing about Yukari Iwatani Kane’s story?

It was a waste of time listening to it

By writing a better book

This book has to be one of the most inaccurate peices of writing i have ever came across. I am a bit of an Apple and Steve Jobs historian and this book is close to offensive with it's inaccurate stories. Sure the writer does come close to most of the historical facts but close is not what i expect from a book claiming to be about situations and historical moments. Very disappointed!!!!!

Has Haunted Empire put you off other books in this genre?

it has put me off anything from the author

The male voices she tries to put on