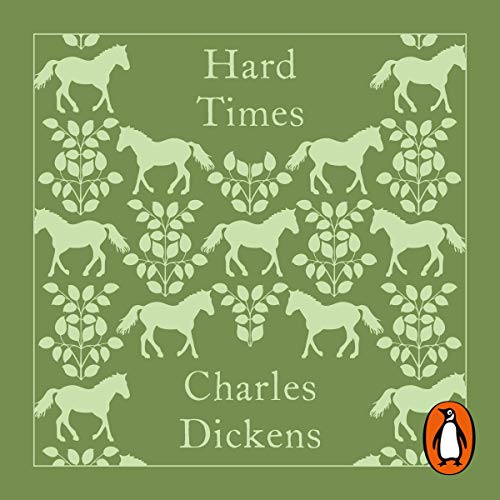 By: Charles Dickens
Narrated by: Michael Pennington
Try for £0.00

Penguin Classics presents the abridged, downloadable audiobook edition of Charles Dickens’ a stark exposure of capitalist exploitation during the Industrial Revolution, as read by Michael Pennington. Coketown is dominated by the figure of Mr Thomas Gradgrind, school headmaster and model of utilitarian success. Feeding both his pupils and family with facts, he bans fancy and wonder from any young minds.

As a consequence his obedient daughter Louisa marries the loveless businessman and bully of humanity Mr Bounderby, and his son Tom rebels by becoming embroiled in gambling and robbery. And, as their fortunes cross with those of free-spirited circus girl Sissy Jupe and victimized weaver Stephen Blackpool, Gradgrind is eventually forced to recognize the value of the human heart in an age of materialism and machinery.

What listeners say about Hard Times

Not my cup of tea!

I had to read this for my OU course. I chose Audible as reading the book itself was sending me to sleep. The narrator was excellent bringing characters to life and making sense of the accented words and language.

The narration. The narrator was fine. But the language of the narration was difficult to get to grips with

It is an accurate depiction of 19th century life

Do you think Hard Times needs a follow-up book? Why or why not?

No, there is always a time to quit while you are ahead. This book is best left as it is

If you could sum up Hard Times in three words, what would they be?

This is my first Dickens story and I found it to be a very enjoyable introduction to the genre, taking me to smoke filled mills and involving me with the characters.

What does Michael Pennington bring to the story that you wouldn’t experience if you had only read the book?

yes and I think I did!

This was also my first experience at an audio book and was part of my BA Hons coursework. It made the experience a very enjoyable one and one I couldn't wait to repeat!