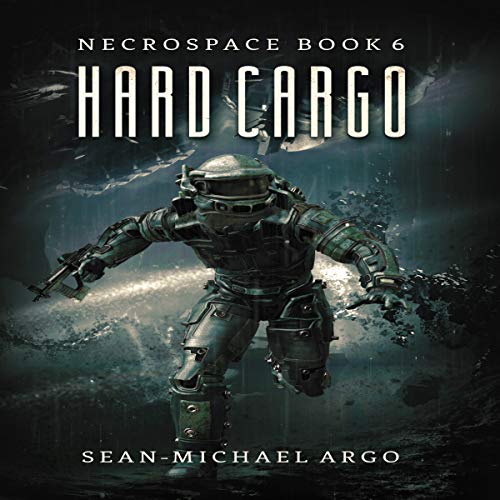 The most wanted salvage marine in the universe thought he was done fighting. He was wrong.

For Samuel Hyst the nightmare was over, left behind upon dead worlds and within the derelict ships drifting through space, he and his family having fled to the edges of the frontier to begin a new life of peace. In the aftermath of a violent raid by slave traders, the long-suffering marine discovers that a relic of the ancient machine civilization has been left at the doorstep of his pristine forest homestead. He feels the menace radiating from it, and knows that the various powers and factions that rule necrospace will soon come for all of them.

Samuel cuts a deal with Captain Dar of the freelance prospecting ship Rig Halo, who years ago saved Samuel's wife and son from the trade war. Tension is high aboard the ship, as the Hyst family adjusts to being in the rough company of the Halo and a life on the run. As it turns out, the rig is also a ship full of mercenaries, and once more Samuel finds himself with rifle in hand and squeezing the trigger just to stay alive.

The hunt has already begun and Grotto predators are closing in.

What listeners say about Hard Cargo

I got this book as a free gift from one of my fav readers and it was not dependant on a good review or even any review, having listened to this book it was fast paced knives edged action and fuelled by heroes, but the story was enhanced by the reader in fact they helped each other make it good listening

So, I would call this one Sci Fi Expendibles 3. That's not intended as an insult, just a expectations setting statement. If you want a solid sci fi action movie-like story, this is the perfect series for that. Persephone Rose's narration lends itself well to this sort of story. He has a larger than life voice that is fun to listen to in this sort of story.


It was just a book written in a fascinating and fascinating way.
I loved the very narrator who did an extraordinary job.
A very charming and interesting book.
I was given this free review copy audiobook at my request and have voluntarily left this review

This is a great series that focuses on the fringes of space and those who eek out their existence in it. Rather like colony’s and mining area of old where you owes your soul to the coming store and your debts were huge and inherited by your children. This is just on a more epic scale. Enjoy the gritty space opera as much as I did. I was voluntarily provided this free review copy audiobook by the author, narrator or publisher

First for me, and better than expected!

Hard Cargo continues with a familiar plot line; skilled retired protagonist is called back into service for one reason or another. Samuel Hyst is our protagonist and he has returned to mercenary service to protect his family. The setting is high tech sci-fi with force guns, spaceports, and spacecraft. Although this is volume six and my first Necrospace title, there was sufficient background in the prologue so I didn’t feel handicapped. Once the story started it was pretty much stand-alone anyway. The characters are developed and likeable. There was action on and off with the evil federation. The story was laid out well, including the bit of politics involved with the main plot and threat. The narration is excellent. I may have to go back to check out some of the earlier volumes. This audiobook was given by the author, narrator, or publisher at no cost in exchange for an unbiased review via Audiobook Boom.

I really enjoyed this audiobook. Sean-Michael Argo can really grasp the action.

This was also my first book narrated by Persephone Rose. He does an excellent job.

This is the first in the series I've listened to, but I really loved it!! Now I want to go back and read/listen to the others so I can really get deeper into the story.

Well written, beautifully narrated, it was a wild ride and I enjoyed the whole thing, really good!
Samuel Hyst is a force to be reckoned with!