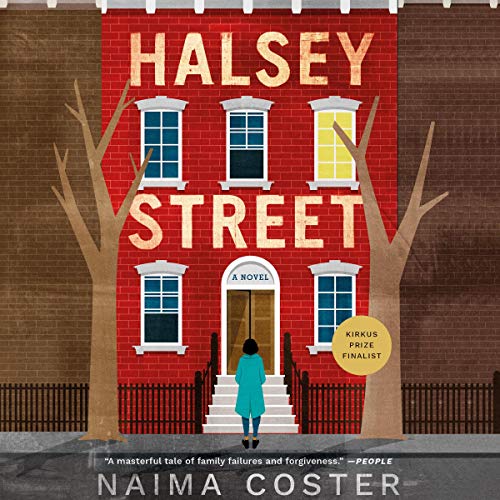 By: Naima Coster
Narrated by: Bahni Turpin
Try for £0.00

A modern-day story of family, loss, and renewal, Halsey Street captures the deeply human need to belong—not only to a place but to one another.

Penelope Grand has scrapped her failed career as an artist in Pittsburgh and moved back to Brooklyn to keep an eye on her ailing father. She's accepted that her future won't be what she'd dreamed, but now, as gentrification has completely reshaped her old neighborhood, even her past is unrecognizable. Old haunts have been razed, and wealthy white strangers have replaced every familiar face in Bed-Stuy. Even her mother, Mirella, has abandoned the family to reclaim her roots in the Dominican Republic. That took courage. It's also unforgivable.

When Penelope moves into the attic apartment of the affluent Harpers, she thinks she's found a semblance of family—and maybe even love. But her world is upended again when she receives a postcard from Mirella asking for reconciliation. As old wounds are reopened, and secrets revealed, a journey across an ocean of sacrifice and self-discovery begins.

An engrossing debut, Halsey Street shifts between the perspectives of these two captivating, troubled women. Mirella has one last chance to win back the heart of the daughter she'd lost long before leaving New York, and for Penelope, it's time to break free of the hold of the past and start navigating her own life.

"Narrator Bahni Turpin's performance is gorgeous. Her voice has a texture that suits the nuances of the novel's plot: easy enough to absorb but with a depth and grittiness that make it interesting and real.... Well-written and beautifully read, Halsey Street is worth a stroll." (AudioFile)

What listeners say about Halsey Street

Bahni Turpin was amazing as always. Her narration made this a worthwhile purchase. the story, however, seemed unfinished. Penelope was hard to like...hard to feel sympathy for a girl like her. On the other hand, she has a difficult upbringing which seemed destined because her parents had never been "parented" themselves. I'd recommend because it's an interesting an complex story. Just wish there was more of a redemption for Penelope in the end.

This is a story of a bitter daughter of divorced parents who finally realizes its her time to grow up and forgive. There are moments of literary beauty but the story is one you’ve heard before.

It took me about 7 hours into the story before I became interested in the books characters, and found that I really didn't like the main character at all, even as I understood that she, like her parent's, was a product of their upbringing.

great narration...however the climax was uneventful. written beautifully...felt like I was there. However, the characters were a bit too whinny about their issues for my tastes. Made their problems bigger than what it was.

The story seemed to just skim the surface of the characters' complicated relationships. Left characters feeling underdeveloped and shallow to me. Could not connect with any of them.

This was a really terrible book. It was the first all-out flop I've ever listen to on Audible. The story was very hard to enjoy and the main character was extremely difficult for me to sympathize empathize or understand. Narrator was great but overall the book is garbage. I kept waiting for it to get good and it just didn't.

Great story, family, love and history. The narration was great! Hope to find more from this author.

I enjoyed the book and the complications of family relationships even though the characters were a bit stereotypical. The narration was disappointing, although not intentional Bahni butchered the Spanish words and failed to sell the story. This story should have been narrated by someone who is fluent in Spanish because the story is sprinkled with phrases only a Spanish person could execute properly like the word "tigere"

this was just ok for me

the dirt was fine. the reading was fine. Penelope was a bit of a brat and an ingrate. but that's just an opinion.

I struggled through various areas of this story. I felt the pace was often very slow. it was draining emotionally with the mother/daughter relationship. But it was cautionary tale about the inability to forgive, as well as mother's who really aren't emotionally and spiritually prepared to be mothers and often wives. They leave broken, damaged children in the world.