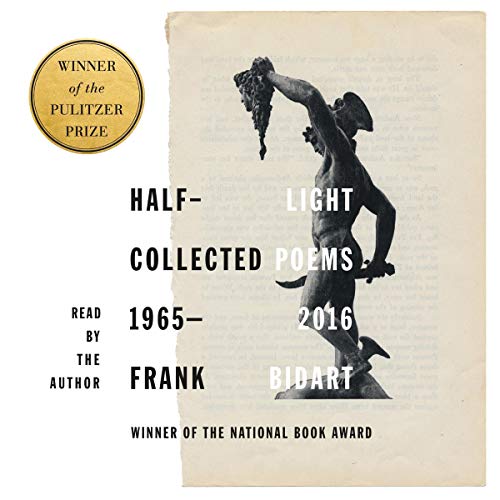 Gathered together, the poems of Frank Bidart perform one of the most remarkable transmutations of the body into language in contemporary literature. His audio represent the human voice in all its extreme registers, whether it’s that of the child-murderer Herbert White, the obsessive anorexic Ellen West, the tormented genius Vaslav Nijinsky, or the poet’s own. And in that embodiment is a transgressive empathy, one that recognizes our wild appetites, the monsters, the misfits, the misunderstood among us and inside us. Few writers have so willingly ventured to the dark places of the human psyche and allowed themselves to be stripped bare with such candor and vulnerability. Over the past half century, Bidart has done nothing less than invent a poetics commensurate with the chaos and appetites of our experience.

Half-light encompasses all of Bidart’s previous books, and also includes a new collection, Thirst, in which the poet austerely surveys his life, laying it plain for us before venturing into something new and unknown. Here Bidart finds himself a “Creature coterminous with thirst”, still longing, still searching in himself, one of the “queers of the universe”.

What listeners say about Half-light

Wonderful, but not as advertised

This is advertised as an unabridged audiobook. It does not contain the whole of Half-light. It ends about a 1/3 of the way through with the poem The Second Hour of the Night.

An Unfastening of the Voice from the Page

This audiobook is not a beginner’s edition of the Orphic genius Frank Bidart anymore than a volume of soliloquies is a beginning to Shakespeare or a best-of album is a beginning to Maria Callas. This audiobook is a brief, bright handful of only a few of Bidart’s sundry masterpieces, including “Ellen West,” “The War of Valsav Nijinsky,” and “The Second Hour of the Night.” If you know Bidart, this audiobook is coming home when you didn’t know you were lost. If you are new to Bidart (I envy you), this might be a steep climb with a bit of outside homework, but it is worth every effort and more because Bidart is that much of a master. Whenever possible, listen to each poem multiple times, find a copy of the poem, read the copy, then listen to Bidart read while looking at the copy of the poem because THAT is the genius of Bidart: his life’s craft and success is that he found a way to order and choreograph the voice of his poetry within spatial psyche of the physical page’s architecture so that when he reads aloud, it’s like hearing someone play from their own sheet music on an instrument of their own making: devastatingly beautiful, otherworldly in scale, and impossible to forget. Ps: there is no “correct” order here, but seasoned Bidart readers might enjoy starting with “Writing Ellen West.” Bidart beginners, start with “The Old Man at the Wheel,” then “He is Ava Gardner,” then go back to “Ellen West.” Go forth, be brave, drink deeply, and always drive directly into the sun.