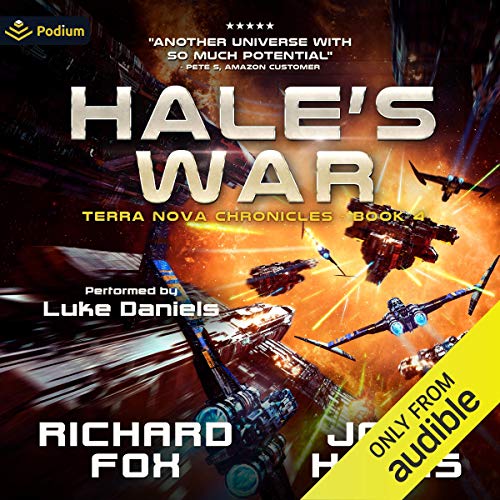 By: Richard Fox,Josh Hayes
Narrated by: Luke Daniels
Try for £0.00

The Battle for Terra Nova rages!

The Triumvirate comes to conquer Terra Nova, landing an overwhelming assault by the surface by Netherguard and Ultari warships in orbit, laying siege to the human colony.

As the battle grinds on, Governor Ken Hale leads the defenders in a desperate battle for survival. Hoping beyond hope that help will arrive in time to save them.

Chief Kit Carson and her Pathfinders, with their new-found allies in tow, race home, praying they make it in time and that their efforts are enough to defeat Emperor Kyrios and his forces.

Hale’s War is the final installment in the Terra Nova Chronicles, taking readers on a wild ride or war, redemption, and salvation that culminates in this epic conclusion!

What listeners say about Hale's War

Love this series so much. I stumbled across this series of books and since i did ive not been able to stop myself. Very well written and the narration is spot on.

You have to listen to it

The only thing is that the voice of the robots is a lot at some times but you get use to it and it’s great!

Fox and Hayes deliver the best installment in the Terra Nova Chronicles, part of the expanded Ember War universe. Hale’s War is the best of the four, by far. Luke Daniels is excellent, as always

Wonderful job with these books!

Another well written series worthy of the ember wars title. Well done Gentlemen! Now when are you guys going to get the other one out to your hungry fans!!!!! Maybe this time some epic space battles as well. Just whatever you do please keep the same style of writing. Not too much self doubt and full of raw determination. Great job!!!!!!!

Not quite over yet or is it?

I loved the ending of this part of the Terra Nova chronicles. The coming together of the cast and the final climactic scenes were all amazing written by Richard and Josh and brought to amazing life by Luke Daniels. The closed the story of the Brothers Hale in an awesome way but left it open for so many more adventures into the universe. I hope that this story and the characters crossover to the Terran Strike Marines and Terran Armor Corp series. So much life left in all of these stories and universe and yet so many more stories to tell. Great work team!

Best Military Sci-Fi books, bar none! The combination of the story and the narrator makes these books a must listen!

I've listened to all of the books now and I've enjoyed the entire experience. The narrator does amazing work with lots of different voices. I've listened, too many books now with a dry monologue voice, he's work brings the experience to life.

Overall great series. I listened to all four books in the series. The plot and characters were entertaining and engaging. There was a good mix of seriousness, battles, and a little bit of humor.

Daniels makes this story come alive! I cannot believe how he can switch between character voices so well. Storyline was intricate and interesting.

Not to bad! Kept story going entire time. May want to read previous story lines to have the background! But overall not bad!