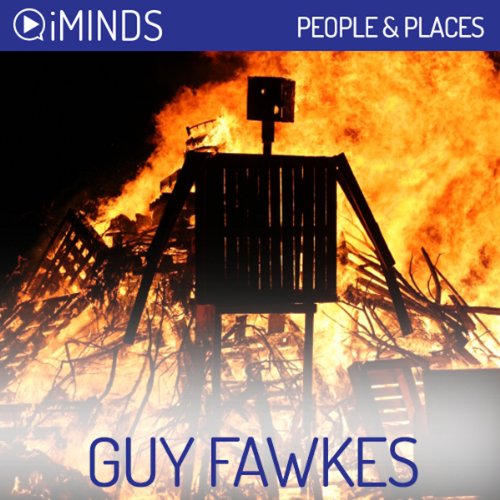 This brief listen traces the background and context behind the failed Gunpowder Plot of 1605, when Guy Fawkes attempted to blow up the British House of Lords and assassinate James I of England. Performer Ellouise Rothwell is gentle but dignified as she tells the story, explains how the plot is commemorated, and relates it to the development of the word "guy" as we use it today. Light instrumental music adds drama without being distracting. Overall, a nice introduction to a key event in British history.

Learn about the story of the infamous Guy Fawkes with iMinds insightful audio knowledge series.

“Remember, remember the fifth of November, gunpowder, treason and plot.”Guy Fawkes has been called the most famous terrorist in history for his involvement in the failed Gunpowder Plot of 1605. His influence is still felt today in United Kingdom where ‘Guy Fawkes Night’ is still celebrated on 5 November.

Guy Fawkes was born in York in 1570 when Queen Elizabeth I was on the English throne. It was an age where the only accepted form of Christianity was Protestantism. Catholics were greatly marginalized and often persecuted. Fawkes was the only son of Edward Fawkes and Edith Blake, both of whom were Protestants. Guy’s father died when he was just seven and his mother remained a widow for nine years before marrying Dennis Bainbridge, who was a Catholic. Whether it was due to the influence of his teacher or perhaps his step-father, Guy converted to Catholicism in his mid-teens, around the time Queen Elizabeth and Parliament were enacting a brutal repression of English Catholics.

What listeners say about Guy Fawkes

Protestants and Catholics in England 1605

This good ole southern gal had never heard of Guy Fawkes and has iMinds to thank for this informative seven minute listen for educating her. 😊 I did know a lot about the conflict between Catholics and Protestants thanks to listening to many historic novels of the time period, and knew that Papists (Catholics) were thought to be the lowest of the low by the governing Protestants. The plot to blow up Parliament was news to me, and an interesting tale it was, wet gun powder and all. The fate of all of the conspirators, including Guy Fawkes is still remembered in England.