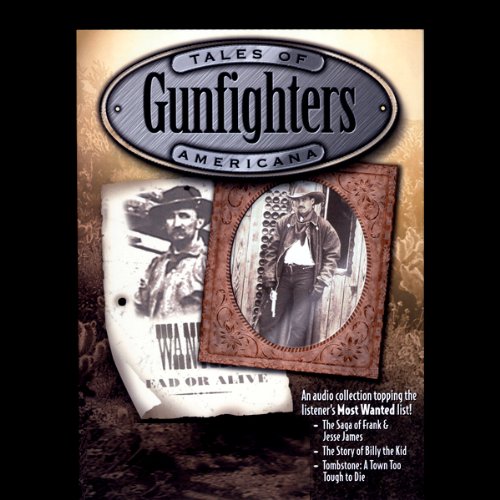 In the late 1870s, out in the sparsely settled territory of New Mexico, life was cheap. Rustlers, thieves, and hired gunmen were drawn to a no-man’s land where they were above the law.

Times were hard in the no-man’s land of Missouri during the Civil War. Union Soldiers foraged, pillaged and terrorized anyone they suspected of helping the southern cause. So begins a terrifying chapter in American history: the saga of Frank and Jesse James.

Tombstone was one of the most colorful towns in the Old West. Here’s the story of the OK Corral gunfight, the Crystal Palace, and the Bird Cage Theater, the Earps and Doc Holiday, the ladies of the evening, and the men and women who made Tombstone what it was…the town too tough to die.

This is a three part radio theater show that provides some basic background on Wild West legends such as Jesse James, Billy the Kid, and Doc Holiday for those unfamiliar with them. Providing basic background is quite literally the best thing I can say about this.

Also, the ending is literally an advertisement to visit the town of Tombstone, Arizona. Take that for what you will.

although some of the facts are incorrect and this play often errors on the side of telling mythologies it is fun to listen to.

The narrators are great. The book with music and sound effects made for an upbeat and interesting read. I want to travel to the old western town on vacation.