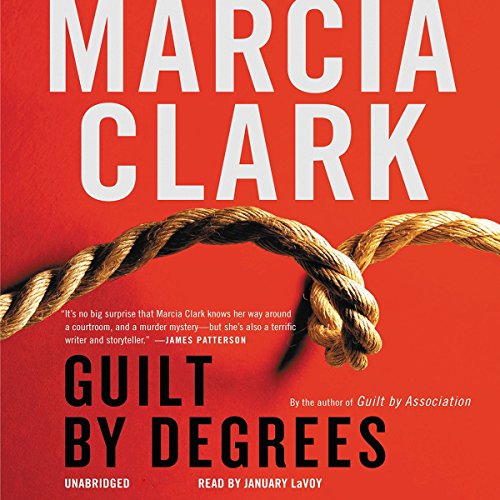 By: Marcia Clark
Narrated by: January LaVoy
Try for £0.00

Someone has been watching D.A. Rachel Knight - someone who's Rachel's equal in brains, but with more malicious intentions. It began when a near-impossible case fell into Rachel's lap, the suspectless homicide of a homeless man. In the face of courthouse backbiting and a gauzy web of clues, Rachel is determined to deliver justice. She's got back-up: tough-as-nails Detective Bailey Keller.

As Rachel and Bailey stir things up, they're shocked to uncover a connection with the vicious murder of an LAPD cop a year earlier. Something tells Rachel someone knows the truth, someone who'd kill to keep it secret.

Harrowing, smart, and riotously entertaining, Guilt by Degrees is a thrilling ride through the world of LA courts with the unforgettable Rachel Knight.

What listeners say about Guilt by Degrees

Marcia Clark never fails to deliver an addictive thriller with a tight plot, humour and lots of twists. This one ends with a perfect opening for a sequel. so just off to purchase it. what a writer! My favourite female author, if you haven't already, the give her a go. I'm sure you eont be disappointed.

"Guilt By Degrees" by Marcia Clark was full of suspense, mystery and also a thriller intriguing listen. I bought this book because of January LaVoy and her amazing narration of another book.
We find thirty-four year old, LA District Attorney Rachel Knight and her friend, Detective Bailey Keller will investigate a homeless man murder and this will take them to a murder of a LAPD policeman. Trying to solve both of these cases will lead them into a dangerous path that will take them where "they will need to uncover a complex story to uncover the truth and risking their lives in the process." It seems the deeper they get into this investigation, both Knight and Bailey are seeing just how dangerous their opponent really is. You will find "Guilt By Degrees" to be a well written novel and enjoyable to read that will keep you turning the pages for more. Be ready for many twist and turns that will keep you trying to guess who this is as the story unfolds. This author writes a novel that is "fulled with mesmerizing details, characters that you can relate to, and an abundance of unbelievable plot diversity." If you are in for a thrill of a ride 'though the world of the LA court system'...you have come to the right place... for "Guilt By Degrees" will take you there and Yes, I would recommend this novel.

January LaVoy was outstanding with the delivery of the story.

This is the second in Marcia Clark’s Rachel Knight series. Rachel, an assistant D.A., is waiting in court for a bail hearing when she sees an extremely ineffective D.A. from her office totally screw up a bail hearing for a client. She jumps in after the fact and offers to appeal for the defendant. She earns the ire of this incompetent but cunning Assistant D.A. The murder involved what appeared to be a homeless man and no one was much interested, but she and her cohort, Lieutenant Bailey Keller find evidence that the person being held for the murder didn’t do it and have the charges dismissed. They also find out that the so-called homeless man is the brother of a LAPD police detective who had been murdered two years previously. His wife had been tried for the murder and the jury found her not guilty. And now his brother had been murdered as well. Suddenly the case has more importance. Rachel and Bailie keep doggedly investigating to determine the truth of who killed both brothers. These books have a good deal of witty commentary between Bailie and Rachel, and the tension is maintained throughout the book. The narrator does a very good job of portraying especially the two women, but others as well.

I picked this up after watching the OJ series on Netflix, where Iearned that Marcia Clark went on to write thrillers. The plot is intricate and interesting, as well as some of the characters. One reviewer said it's a chick lit whodunit. Yes, there is that. But I did enjoy this book and would recommend for anyone interested in a fast paced and interesting procedural and cop thriller.

Really enjoyed this book and I love how the characters seemed so real to me. Action packed and full of twists and turns. I recommend this series!!!

there was plenty of twists and turns, left room for doubt, but in the end all the evidence was there to support the original theory!

Love this series, I have read three of them and they have all been good. I love the detective/prosecutor duo. Keep writing Marcia Clark.

What made the experience of listening to Guilt by Degrees the most enjoyable?

Just the twist and turns that that story had. From what looked like a simple re-file of a case to the multiple manipulative turns and dangerous situations that Racheal had to go through, was just incredible. Marcia Clark is spot on in this novels and January LaVoy is very good with the various voice overs.

The plot did keep me on the edge of my seat by having the different twist and turns. I like how it is connected character wise to the other three books in the series.

I think she did a great job at the various voice overs for the different characters. She did and OUTSTANDING job at doing the male characters, as well as the various female voices in the audiobook. I enjoyed listening to her.

Well I was moved and intrigued by how Lila Baer was stalking her and in my mind for no good reason, until everything started to come together.

I normally like to read a book and hold it in my hands. However, Amazon gave me a free credit to get one book off of Audible.com and I took advantage of it. I must say, listening to the book, really gives a story a different look and feel for the better.

Not my favorite Marcia Clark

In The Beginning, I stayed away from Marcia Clark's books -- just another celebrity author, I thought. Published because of who she is. Most likely isn't very good.

Well, that was wrong. These ARE good books -- very very good, in fact. I've read -- paper versions -- most of them, but this was my first listen. That might have been one of the problems here.

When you read the books, "Bailey", Rachel's trusty sidekick, comes off like a regular person -- clever, smart, occasionally witty, a good companion. But in January LaVoy's narration, Bailey comes off as sullen, snide, negative about everything and usually sarcastic. I got to the point I couldn't understand why Rachel would hang with this toots, certainly not as her "best friend". Who could put up with her sullen, nasty response to everything?

So in listening, in trying to avoid the bitter Bailey, I found myself thinking about other things, first of all, how much like Linda Fairstein's books these Marcia Clark books are -- minus the history lesson that's always a part of the Fairstein oeuvre of course. But consider: both Alex Cooper (Fairstein's protagonist) and Rachel Knight have power-lawyer jobs -- both work for the prosecution, but neither spend much time at all in the courtroom. These are not "legal thrillers" in the sense that Grisham's are -- unlike his books, which seem like little more than trial transcripts, these are more tales of investigation than courtroom brawls. Neither does either woman spent much time in the office -- there's little evidence of any of the paperwork that (in the real world) is so much a part of the job. Both seem to have unusually capable and hard working underlings to do most of that -- which again, in government work, would be highly unusual. But then, this is fiction.

So what do they spend their time doing, these lady lawyers? Investigating, on their own, without supervision for the most part, and most certainly on their own initiative. Also unusual.

But second, both spend an inordinate amount of time dealing with food. That's right -- they are consumed by food -- acquiring it, eating it, selecting just right right 'new restaurant' to patronize, deciding which friend to dine with, gossiping over the meal, and the deciding who is treating whom, on this occasion.

I don't object to any of this food-passion, in fact, I sort of enjoy the endless variety in menus, but I do wonder if there are real people who live like this. Are there really people out there who eat out in restaurants -- or room service, like the hotel-dwelling Rachel -- three times a day? Jeepers, what a bummer that would be.

Anyway, in this book, there's one hilarious moment: an old boyfriend of Rachel's has moved into the downtown neighborhood, and she's giving him the lay of the land, so to speak -- where things are, where he can find this and that, including -- get this -- where he can buy groceries.

That made me laugh out loud -- how in heck would SHE know? Rachel either orders from room service, or eats out! Thinking of Rachel Knight making a foray into a -- gasp -- grocery store is as ludicrous as seeing Silver Chief, Dog of the Klondike, eating off bone china at the Top of the Mark! I don't think Rachel Knight does grocery stores. Ever.

So, bottom line: I like the Marcia Clark books very much. But whether I will listen to another one depends on who they pick as narrator. I like "Bailey" too much to see her portrayed as a spoiled brat who should be sent to her room until she improves her attitude.

I saw the name Marsha Clark and decided to try out the book. I had read her book "Without A Doubt" about her role as ADA in the O. J. Simpson trial. The story was interesting enough but what did not ring true to me was that ADA Knight was going around each day with the detective Baily investigating the case. In real life I do not think an ADA would have the time do play investigator. I would have prefer to have court room drama instead of a detective story. January LaVoy did a good job with the narration. Other than the above comment the story was interesting and had some twist and turn of interest. The ending appears to be setting up for another book.

What was one of the most memorable moments of Guilt by Degrees?

If you could play editor, what scene or scenes would you have cut from Guilt by Degrees?

I would have rejected it for publishing

The author has good plot ideas but needs to go to character development school. The characters are naive, immature, and shallow.