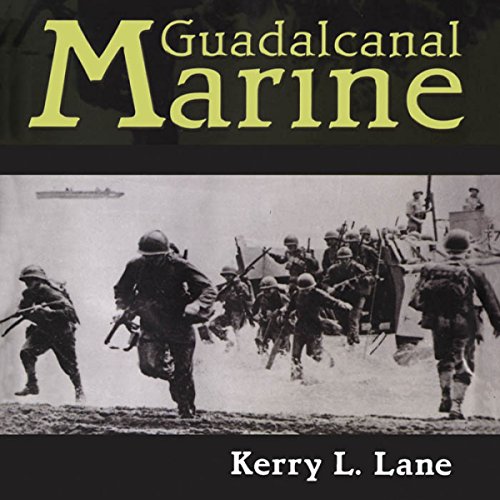 In Guadalcanal Marine, Lt. Col. Kerry L. Lane recounts the dark reality of combat experienced by the men of the 1st Marine Division fighting on Guadalcanal and Cape Gloucester. With his text he brings to life the struggles of his companions as they achieve these two astonishing victories.

Lane, a 16-year-old farm boy from North Carolina, battled the Japanese and rose to heroism powering a bulldozer to bridge "Suicide Creek" in the swamps on Cape Gloucester. There he led his Marine comrades to victory.

Lane describes the trials of the common Marine serving in the first grueling island campaign. In vivid prose, he tells of joining the service before the war and of training. Soon after the shocking news of Pearl Harbor, he and his trusted comrades fight the Japanese in one of the bloodiest battles of the Pacific.

In the tropics, Lane and his companions suffer malaria and dysentery, endure jungle rot and oppressive heat, and grapple with an enemy who fights to the death. Throughout the audiobook, Lane bares the experience of the average Marine and his historic World War II journey, revealing how one teenager became a Corps hero and ultimately finished his military career as a lieutenant colonel.

What listeners say about Guadalcanal Marine

A good personal story of the time

I want to give a very honest review.

I LOVE WWII books. And this book does an ok job of telling an individual story of Guadalcanal (and the time leading up to it). That being said, I found myself very bored by it. Maybe because it's just the story of one guy vs an overview of the entire battle.

There is not enough emphasis put on the battling and just how dire their situation was. It's such a casual story. It doesn't make you feel the way other, similar books do. I also think the performance leaves a bit to be desired.

one word... AMAZING ... one of the best World War 2 books I've read love this

This book is well done. The story and narration held my attention. There are so many good audio books that get sabatoged by poor narration; not so with this one. Very well done.