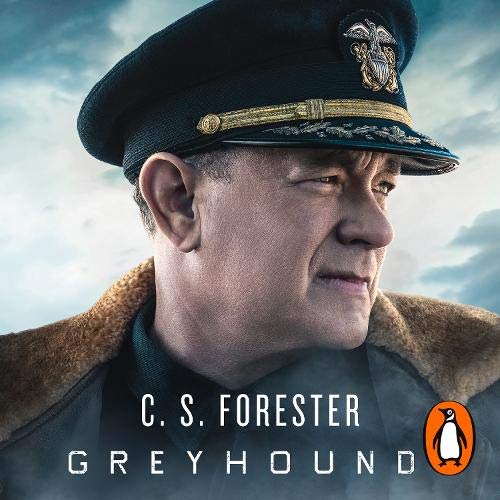 Soon to be a major motion picture starring Tom Hanks.

Greyhound, an international convoy of 37 allied ships, is in operation. As Captain Ernest Krause leads his first command of a US destroyer, the convoy ploughs through icy, submarine-infested North Atlantic seas.

All the while hotly pursued by wolf packs of Nazi U-boats.

Grappling with his newfound superiority and haunting self-doubt in 48 hours of desperate peril, Captain Krause's hopeless mission is doomed to fail.

But armed with extraordinary courage and grit, hope may just be on the horizon....

"I recommend Forester to every literate I know." (Ernest Hemingway)

What listeners say about Greyhound

I really enjoyed this story. A ‘different’ kind of war story that introduced an interesting and intriguing character (an ideal role for Tom Hanks) that we learn a lot about but also know there is so much more that we don’t know. A ‘ripping yarn’ but also a reflective and engaging character study. A must.

Too much detail for me

I saw this film a few months ago and have watched it twice since. The audio book doesn’t disappoint it grips one from beginning to end. The narrator reads as though he is living the experience. The thing that struck me and which was expressed so well was Captain Ernest Krause’s sense of responsibility and dare I say love for those under his command and in his care. It made me realise that although it is rare these days, the call to arms is a Noble calling to the right men.
This book resonated with me because nearly sixty years ago as a schoolboy in a Catholic boarding school we had a teacher ‘Mr Reid’ he was a rock not unlike Captain Ernest Krause, he taught us history and English. We liked to take him off on tangents to distract him from boring school work and get some of his anecdotes. One day during a history lesson about WW2 the opportunity presented itself and a class mate jump in, “you had a brother in the war Sir what happened to him’. He then went on to tell us how his brother was a sailor in the Merchant Navy, and how one dark night his ship was torpedoed in the Atlantic and the sea became his grave. Mr Reid had quiet loving tears rolling down his cheeks and a classroom of schoolboys getting a lesson in pure love. This book brought me back to that classroom to that history lesson. God bless all those whose graves are the sea.

The story is boring and repetitive. The performance is ok given the quality of the story.

Well written book telling the story of an American ship's experience of the Battle of the Atlantic.

Really enjoyed this book. The author really captured the tension and demands of the people who defended the Atlantic convoys during ww2. A realistic and gritty account. Should make an excellent film.