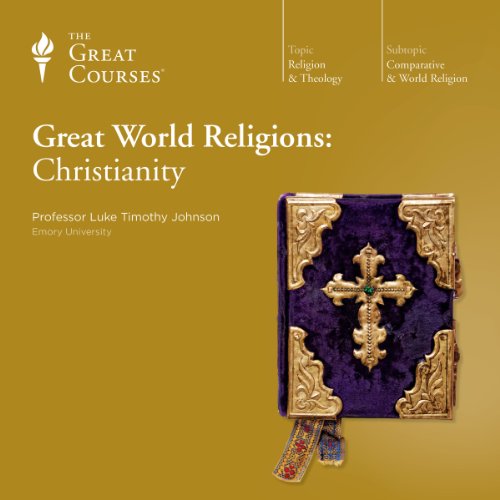 These 12 lectures are an engaging and comprehensive introduction to one of the world's greatest faiths. By concentrating on the basics that every well-educated individual should know, Professor Johnson's lectures provide you with a clear survey of the most important elements of this religious tradition-and a framework for further study.

In this lecture series, you'll consider fundamental issues including Christianity's birth and expansion across the Mediterranean world, the development of its doctrine, its transformation after Christianity became the imperial religion of Rome, its many and deep connections to Western culture, and the tensions within Christianity today.

Professor Johnson's synthetic approach provides first an overview of the Christian story, how it understands history from creation to new creation - and the relation of scripture to that history, and the Christian creed: what Christians believe about God, Jesus, the Holy Spirit, and the church. He also explains Christian practice as expressed by the structure of the community and its sacraments, by the struggles of Christians to find a coherent and consistent moral teaching, and by various manifestations of Christianity's more radical edge in martyrs, missionaries, and mystics.

By the end of this engaging and accessible series, you'll finally have a true grasp of Christianity's distinctive character, the major turning points in its history, its most important shared beliefs and practices, and, above all, its continuing appeal to many of the world's peoples.

Insteresting but spoiled by inacuraces.

Have you listened to any of Professor Luke Timothy Johnson’s other performances before? How does this one compare?

I did learn a lot.

I lost trust in the lecture once the incorrect historical information on some items was presented, I wondered what else was changed to meet modern progressive revisionist history. First refereeing to Palestine in Jesus time is incorrect, there was no Palestine until 70AD. Then the reference to the Crusades was miss-represented, yes the 4th Crusade did invade Constantinople, but it was not the last Crusade, and reasons for it are wrong. There are one or two other items that where incorrect. I am not sure if the lecturer actually does not know, or modified to meet modern agenda. I am losing interest in the Great Course as their lectures are no sticking to the facts. I noted this in the Jewish lecture as well, and see my comments on the Islam course.

Thoughtful. went through it twice and am keeping it active to review periodically. highly recommend

Gets a Little Confusing

While explaining the various Christian churches, it gets a little jumbled. Otherwise, this course is a decent introduction.

Unfortunately, this course did contain almost no insights beyond elementary historical or sociological level. The performance was adequate.