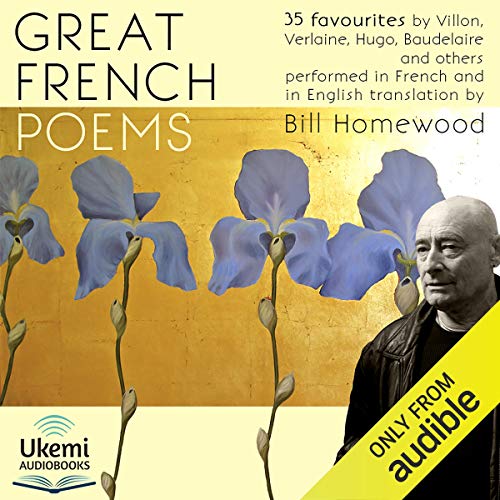 Here are 35 of the greatest poems in the French language, carefully selected and read in French by Bill Homewood, the bilingual English classical actor who has spent half his life in France. To help those English speakers with just a little French to appreciate the glories of these poems, he provides his own clear English translations.

The poems range from the earliest medieval and renaissance masterpieces - François Villon, Joachim de Bellay, Pierre de Ronsard and others - to the high romance of the 19th century, with Victor Hugo, Paul Verlaine and Charles Baudelaire, then on to the poets who revolutionised style and led us into the 20th century: Stéphane Mallarmé, Arthur Rimbaud, Guillaume Apollinaire and Paul Eluard.

Recorded in France, this collection has already attracted praise from leading figures in French culture and critics alike.

"Beautiful voice, perfect sense, a gravity and a sensibility that releases the inner life of each poem - Bill Homewood is a bit of a bi-lingue miracle, and his renditions will be of immense use to all lovers and students of great French poetry.” (Dame Janet Suzman)

This is one of the best audiobooks available and I swear I would pay double-no, TRIPLE to listen to more classic liturature in it's orginal language paired with a proceeding english translation in a track by track format like this beautifuly constructed audiobook.

Ukemi has produced an ingenius way of appreciating these poems by hearing the beautiful lyricisim of the orginal with a proceeding english translation that puts into context what is lost in the voyage from meaning to understanding while still providing a complimentary presentation of the orginal work.

The only other audiobook on Audiobook quite like this isn't specifically a language learning program is the Naxos edition of ＂The General Prologue and The Physician's Tale by Geoffrey Chaucer＂which consists of the orginal Middle English text along with a modern "translation" following it.
But imagine if there was audiobook of The Bible with every verse in it's orginal Hebrew and Greek followed by an English translation? I mean, I know the Qur'an is much shorter, but why isn't there more demand?

Anyway, you won't regret purchasing this book. Like every Ukemi title it is engaging and endlessly relistenable.

I speak no French, and know next to nothing about French poetry. So I took a bit of a chance in getting this audiobook - 35 poems read first in French, then in English translation. It definitely paid off - I could hear the beautiful sounds and rhythms of the language (marvelously read by Bill Homewood), and then savor the meanings in English. Highly recommended.

Nothing lost in translation, the French love of poetry is so very inspiring. The moment just before the moment, piqued, teased, ready to explode in colorful blooms!

A new look at old poetry. Regretfully, I do not speak French, but it was quite an experience to listen to the musicality of the poems. The translations were clear and heartfelt, while Bill Homewood's rendering in both languages were very professional. If you like French poetry but cannot read in that language, this is the audiobook for you.