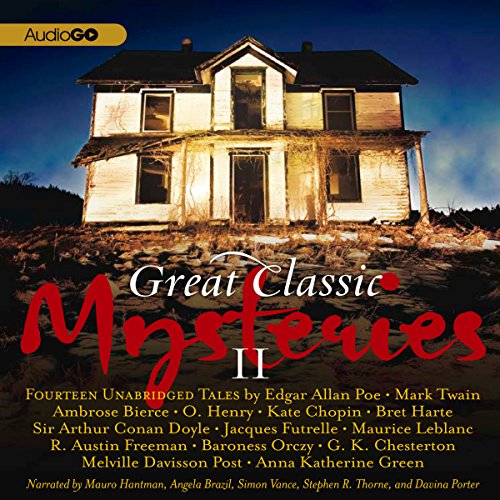 Fourteen mysteries to test your inner sleuth! This collection includes "The Stolen White Elephant" by Mark Twain, narrated by Mauro Hantman; "The Fenchurch Street Mystery" by Baroness Orczy, narrated by Davina Porter; "Problem of the Superfluous Finger" by Jacques Futrelle, narrated by Stephen R. Thorne; "The Blue Sequin" by R. Austin Freeman, narrated by Simon Vance; "An Intangible Clue" by Anna Katharine Green, narrated by Angela Brazil; and "The Oblong Box" by Edgar Allan Poe, narrated by Mauro Hantman, among others. Newly recorded by premier narrators for this original anthology, the crimes, criminals, and sleuths depicted here set the standard for decades to come, and remain as entertaining today as they were when first published!

Two Twain parodies are worth a listen

Chapters and stories don’t align. 4:20 before the beginning of chapter 11 is a hilarious Sherlock Holmes parody. Follow an exploit of Hemlock Jones’s Inductive reasoning. I haven’t laughed so hard from an audible book ever! A dry Poe story follows but then about 30:30 into chapter 13 is the detective story of a stolen elephant which definitively skewers their methods in unsurpassed manner.
I didn’t find anything else memorable and many stories were terrible like discarded chapters from longer books, having no beginning or end or intrigue.