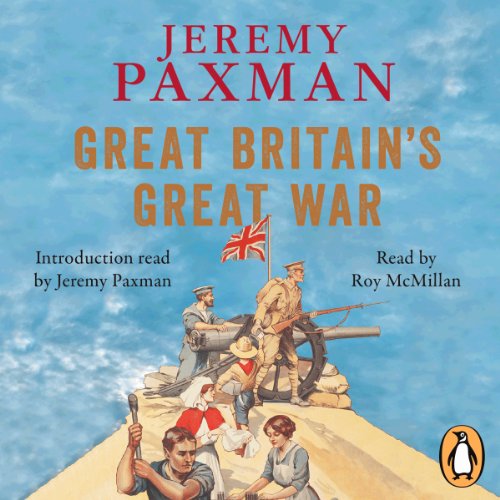 "Paxman is witty, incisive, acerbic and opinionated... In short, he carries the whole thing off with panache bordering on effrontery" (Sunday Times) "He writes with wit and penetration, and every page can be read with relaxed pleasure" (Spectator)

Read by the actor Roy McMillan, this magnificent history of the First World War tells the story of the war in one gripping narrative from the point of view of the British people. We may think we know about it, but what was life really like for the British people during the First World War? The well-known images - the pointing finger of Lord Kitchener; a Tommy buried in the mud of the Western Front; the memorial poppies of remembrance day - all reinforce the idea that it was a pointless waste of life. So why did the British fight it so willingly and how did the country endure it for so long?

Using a wealth of first-hand source material, Jeremy Paxman brings vividly to life the day-to-day experience of the British over the entire course of the war, from politicians, newspapermen, campaigners and Generals, to Tommies, factory workers, nurses, wives and children, capturing the whole mood and morale of the nation.

It reveals that life and identity in Britain were often dramatically different from our own, and show how both were utterly transformed - not always for the worst - by the enormous upheaval of the war. Rich with personalities, surprises and ironies, this lively narrative history paints a picture of courage and confusion, doubts and dilemmas, and is written with Jeremy Paxman's characteristic flair for storytelling, wry humour and pithy observation.

Jeremy Paxman is a renowned broadcaster, award-winning journalist and the bestselling author of seven works of non-fiction, including The English, The Political Animal and Empire.

If you could sum up Great Britain's Great War in three words, what would they be?

Both my grandfathers served and survived in that war and to be honest I had no idea what they had gone through, if nothing else Paxman's book certainly clarified that with descriptions of trench life and death. The social comment on that period of time is fascinating a very different world of duty to King and country compared to now. The book also deals with life after the war and the very different place Britain and her empire had become. There does not seem to be much doubt in Paxman's mind this war is the beginning of the end of the British Empire and perhaps the UK itself. I found this an excellent book and will probably revisit again.

Best so far. Knew my preference was non fictional and this wonderful book reminded me why.Extremely well written by JP and and brought to life by the man himself (with a little help from the excellent Roy McMillan).

The marvellous collection of anecdotes, memories and sub stories.

What does Jeremy Paxman and Roy McMillan bring to the story that you wouldn’t experience if you had only read the book?

They quite simply brought it all to life for me.

A real mixture of emotions leapt from this book. Really, really funny but terribly saddening as well.
I dreamt of my granddad, a Great War soldier and a wit in his day, throughout listening to this book.
I realised and recognised his (and many many others) bravery and commitment to the cause.

This is not a war book in the sense that others might think. It is a thousand times better for the 'inside stories' and astounding research that JP has weaved into this brilliant book.A great read (listen).

Paxman is an astute social historian, he writes with an easy, wry and consistent voice. He is very well served by Roy MacMillan, whose reading is nuanced and engaging. Excellent listen.

This was interesting and riveting all the way through. I learned a great deal about the war, the tactics, the realities for the soldiers. It certainly provided a different vision of the war than the one we teach.

If you could sum up Great Britain's Great War in three words, what would they be?

What was one of the most memorable moments of Great Britain's Great War?

It is impossible to pick out one memorable moment from this book which covers such momentous events. But it is the mixture of recounting personal stories alongside the narrative of great events that this account of the Great War distinct for me.

This is not the sort of book that you can listen to all the way through -- there was many a time when I stopped the recording to go back over something for a second or more time. The writing provokes one to think of things as they occur to you and before you know it the narrative has moved on. But you are rewarded by going back and re-listening to the account of events and by pausing from time to time to take it all in.

I got this book because I missed the television programme and in a way I'm glad I did. Previous ideas about World War I were challenged by this account and I think rightly so.

Very straight forward and easy follow guide to ww1. The narrator does well to keep the pace and is expressive in all the right places. Paxman's writing is clear and not dogged down with too much trivial information. If you want a book to tell you about all aspects of the First World War then look no further.

Paxman in a new light

Although more of a documentary than the usual fiction I enjoy, Jeremy Paxman puts a new slant, albeit anti-war on this conflict. Definitely one to listen to again to cement all the data. In my top five audios.

Can only be the author, Kitchener and French don't deserve any credit.

Which character – as performed by Jeremy Paxman and Roy McMillan – was your favourite?

No comparison, one the author, though the introduction set the tone for the book, the other the reader, first class.

Many of the facts are well known and historically recorded, yet Jeremy Paxman has unearthed many lesser known facts that makes this tragic war come to life even more. There is no question that this splendid book is anti First World War, yet the depth of information leaves the listener wondering what comes next.

Up in the top three

Easy listerning at the right level

I went on tour of trenches and the cemeteries and was emotionally moved I finished the book when I got back from Belguim and it made me cry no one around so it was fine.

I found the book informative and well written. It gave an interesting view of the war from all social spectrums of the day and is well worth a read.

Well read and an excellent insight into a completely different culture. So pleased to see someone challenging the lazy journalism of the futility of war.