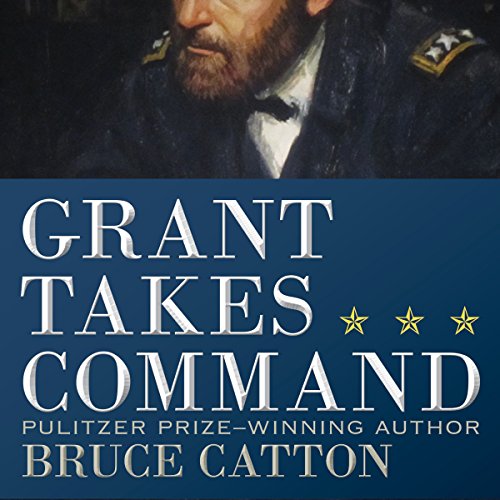 A thrilling account of the final years of the War Between the States and the great general who led the Union to victory.

This conclusion of Pulitzer Prize-winning author Bruce Catton's acclaimed Civil War history of General Ulysses S. Grant begins in the summer of 1863. After Grant's bold and decisive triumph over the Confederate Army at Vicksburg - a victory that wrested control of the Mississippi River from Southern hands - President Abraham Lincoln promoted Grant to the head of the Army of the Potomac.

The newly named general was virtually unknown to the nation and to the Union's military high command, but he proved himself in the brutal closing year and a half of the War Between the States. Grant's strategic brilliance and unshakeable tenacity crushed the Confederacy in the battles of the Overland Campaign in Virginia and the Siege of Petersburg.

In the spring of 1865, Grant finally forced Robert E. Lee's surrender at Appomattox Court House, thus ending the bloodiest conflict on American soil. Although tragedy struck only days later when Lincoln - whom Grant called "incontestably the greatest man I have ever known" - was assassinated, Grant's military triumphs would ensure that the president's principles of unity and freedom would endure.

The Narrator makes it difficult to listen to this masterpiece. That's unfortunate, but I powered through the constant mispronounced names and places because the story is gripping and the author is famous for his historical accuracy and masterful storytelling. That said, be warned that many of the Narrator's mistakes are cringeworthy.

Get the book - the paper version

Catton is superb as always, although this ranks slightly below his best work.

Regardless the forced and over acted narration ruins it. The narrator feigns an interest and knowledge that he so obviously does not possess. Perhaps one may be forgiven for being unable to pronounce the names of Generals Sigel and Meigs and even the city of Staunton, VA, but there's no excuse for mispronouncing the Battle of Chickamauga, the second bloodiest of the war, or the surname of General Patrick Cleburne, arguably the ablest division commander the war produced.

Rather than set forth more (and perhaps more egregious) examples I'll simply state here that I am mystified as to why one too lazy to pick up a dictionary would attempt to narrate a work of this caliber and why any sane adult would let him near a microphone.

It’s unfortunate that the narrator didn’t learn the proper pronunciation of some proper nouns. It was quite a distraction. Silly boy!

Would recommend buying the book, but NOT getting the audiobook. The narrator was terrible. See my remarks about his performance below.

What other book might you compare Grant Takes Command to and why?

Grant Moves South which is the second in the Grant series by Bruce Catton. The details of Grant's move down the Mississippi and the battles in Tennessee and Mississippi are riveting and the narration by Bronson Pinchot is fabulous.

What didn’t you like about Kevin T. Collins’s performance?

Kevin Collins read the book like he was on the stage doing one of the Shakespearean history plays like Henry IV or Richard III. The narration is grating with him dramatically emphasizing things that can stand alone as important historical facts. This wasn't just my opinion, but also my husband's. He asked me to shut it off which is quite out of character for him.

Was Grant Takes Command worth the listening time?

Would have been if not for the narrator. I read the book and it is fantastic.

Bruce Catton is my favorite Civil War author. Anything written by Mr. Catton is a work of art.

An excellent book and an excellent look into the late war mindset of General Grant. Highly recommend.

As usual Catton is great. But Collins... he sounds like that annoying high school English teacher who would read (badly) out loud in class. Monotone, lack on inflection... but for civil war buffs, Catton's prose overcomes this so-so narrator.

After This You Won't Take Grant For Granted

Great follow up companion to Catton's other book on Grant. Detailed stories with the personalities of those involved. You will not only learn history, but also be able to draw your own conclusion as to whether US Grant was an alcoholic or his drinking was exaggerated by his enemies and perpetuated by writers due to laziness or their belief that it made a better story.

Catton's history of the second half of U.S. Grant's Civil War career is rightly famous, but it is almost RUINED by an appallingly bad narration by Kevin T. Collins. Collins cadence is strange and disjointed, with odd pauses and large numbers of jarring mispronunciations. Worse is his pedantic tone, like a junior high school student reclaiming a Shakespeare soliloquy in class, or a pompous teaching assistant lecturing in a community college. Continually hard to bear, one struggles through to redeem the investment of time made in the first volume, and the funds spent to purchase this atrocity.
Rather than purchase this, anyone interested in Grant is advised to listen to Bronson Pinchot's excellent performance of volume one... GRANT HEADS SOUTH....and read rather than listen to GRANT TAKES COMMAND.

I never review anything, but this version should come with a warning. I'm an hour and a half in and I'm giving up on this audiobook and reading it instead. The narrator's delivery seems to take little account of the meaning of what he's actually reading, it feels over-performed and it's too distracting. Good narration of nonfiction is best when you don't even notice it's there. There are also frequent mispronunciations of words that anyone with even a passing familiarity of the subject matter would be comfortable with. He manages to pronounce Chickamauga two different ways.

Catton's prose is great; his books tends towards the her-worship a little at times, but is basically well-reasoned, His books are very easy to read, but this is chronically difficult to listen to.