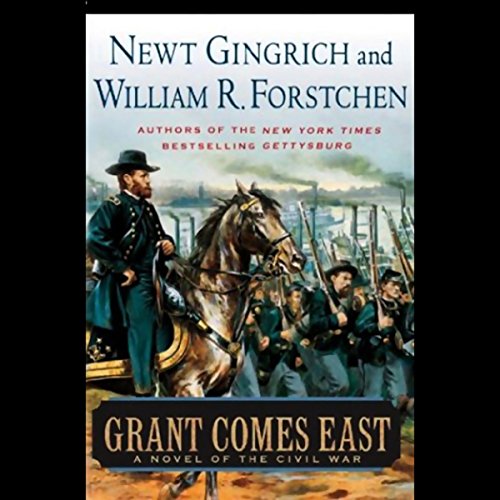 It is July 10, 1863, and Baltimore is in the hands of the Army of Northern Virginia under the command of Robert E. Lee. Shattered remnants of the Army of the Potomac have fallen back into Washington, digging in, preparing to make a desperate stand. Six days earlier General Ulysses S. Grant and his army of 60,000 had taken Vicksburg. The last telegram out of Washington before the rebels cut the line changed all that. Grant and his men were to come east and save the Union. Now two of America's greatest generals will face off in a battle that could decide the fate of a nation.

Once again, Newt Gingrich and William Forstchen have created a brilliant story of how the Civil War could have unfolded. In Grant Comes East, they use their years of research and expertise to take their legions of fans on another remarkable journey.

"An exciting alternative history of the Civil War....Vivid, detailed, and insightful. This is one of the best novels of the Civil War to appear in recent years." ( Publishers Weekly)
"Notably original." ( Booklist)

I really liked this book. Although fiction, it weaves an interesting tale that rings of actual history. The narrator adds a lot to this book with interesting inflection and accents. I can't wait for the next one.

Great twist on what could have been

I very much enjoyed this book. I am a fanatical Civil War enthusiast so wasn't sure if I would like a different view on what could have happened. I do appreciate the explanation Gringrich gave of "Active History". Good book and very well narrated.

part two is as good as 1

This 2nd episond is as good as the first. The Third is even better. I could not give a higher reccomendation. I was rivited. The time slipped by. When it ended I was craving more. Three cheers for the authors and three cheers for the narration.

I enjoyed this bood as much or more that part 1 (Gettysburg). Again, very well written facinating and easy to follow. Be warned that this is a part two of (I assume) three. I was not aware of this and am disappointed that I will have to wait for (again, I assume ...I do not know) the next chapter to see how this version of the Civil War ends.

Frankly I didn’t know what to expect when I started this book. I love history and a good mystery so when I purchased it I thought “well this might be interesting.” It was a real page turner, (as they say). Now I need to buy its sequel to find out how the story carries on.

Boyd Gaines does an excellent of narrating this book.

As the authors said in a forward from the first book this is not "alternate history" it is more of a possible what if history. However, a simple Grant win in the Civil War is nothing new, it is int't even all that interesting in that we already know what happened after the Northern victory. The listener learns nothing new about our main protagonists other than the authors think they are somewhat 2 dimensional in that they assume even after a major Southern victory at Gettysburg history would simply end up the same way. How about a Southern win and the struggle to come to terms with the South having to end slavery on their own? This was somewhat covered in "Guns of the South" although much more sci-fi than this series.

The first two books were really good, very engaging and if you want to hear a story about what could have happened in the Civil War, stop after the first two books. A ton of potential flushed down the toilet in the third book. Don't bother this this one.
Voice actor is, as always really good as is everything else I have heard from these authors.

Every character, North & South has a unique voice. Characters seem very real and the differences between the sides and individuals are revealing.

Captivating book! Hated for it to end. History has come alive. Really get a look into the person who were made the decisions. Sad to see how egos have driven so many historical events.

Did not realize it did not follow actual events.

What would have made Grant Comes East better?

Following the actual historic events, but that is just me?..... I just thought it was a factual accounting of real events with made up dialogue to the authors delight but it is really just total fiction. Hope others don't think this is real history. I have read too many history books and that makes me cringe to hear it altered this way guess I will stay away from this type of book but obviously many enjoy it immensely. Sorry!

Which character – as performed by Boyd Gaines – was your favorite?

just not my cup of tea, gave it a shot because of Newt.